The Last Conquistador by Michael Elias 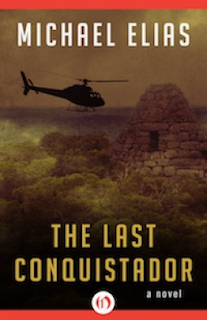 The Last Conquistador is entertaining. I would love to visit the Inca tunnels of Peru and see some of the ruins. It is a believable way how the lost city stays hidden in the Amazon. Their was a few parts that I got confused in but overall a good read.

Nina is leading a archaeology and they find two mummies. The problem one of them is still fresh, but done exactly like the old Inca mummies rituals. Her group hurries back to the city to report the child murder. The group was followed by Quiso a young Inca boy. They took his brother away. He must follow and retrieve his brothers body so he can rest in peace.

Quiso is very brave and smart. He has never been to the Spanish city or ride in moving cars.

Adam is a FBI Agent and when a American child is kidnapped he is sent into try and find him. While he is there a few more kidnapped children are taken. A Inca mirror is left in place. He finds out that it has happened before years ago children are taken and not asked for any ransom. Later they are returned with no memory.

This book is full of drama, history, real live events but it also brings a Inca city to life in a believable way. What life might be like for a isolated city from the world. It is easy to get lost in the story and want more of it.

I really like the character Quiso. He is brave does what he thinks is right. The other characters have likable traits and some not so likable ones.

On a Peruvian Andes mountaintop, archaeology professor Nina Ramirez and her students make two stunning discoveries: the five-hundred-year-old mummy of an Inca girl, the victim of ritual sacrifice, and in another grave, the corpse of a recently kidnapped boy wearing the same ancient costume. Child abductions are being reported throughout Peru, and when an American boy is snatched in Lima, FBI agent Adam Palma is assigned to the case.

At the home of a manic artist who was the sole survivor of similar kidnappings in 1962, Adam is shown a disturbing mural depicting the Spanish conquistador Francisco Pizarro. In the painting, the conquistador’s face looks exactly like his own. Adam teams up with Nina, and with the help of a mysterious boy named Quiso, their investigation takes them deep into the Amazon jungle in a search for a lost city of the Incas, where the ancient sacrificial rituals may still be alive. As Quiso leads Nina and Adam closer to the city and its secrets, Adam realizes that the only way to save the kidnapped children is to make the past repeat itself. Adam, like his distant ancestor Pizarro, must square off against an Inca high priest.
Posted by rhonda1111 at 9:43 PM