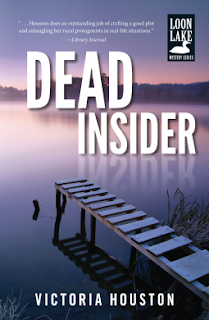 This is the second of the series I have now read and have liked both of them. I would like to read the others in the series sometime. The main characters are back plus some new ones to enjoy. The Mystery keeps you guessing almost all the way through the book. It is a clean read. Their is a lot of fishing in the story but not as much as the first one.

Sheriff Lewellyn is back. She is a strong woman character. Her hobbies are fly fishing. She loves to relax fishing especially after tough cases. She and Doc Osborne are together in a relationship now.

Doc. Osborne is a retired Dentist. He helps out once in a while if the medical examiner is busy or out of town. He did some dental identifying in the Korean War. He is a widower with two grown daughters. Loves to fish is happier than ever before.

Ray is still a fishing guide, grave digger, good cook and takes photo's sometimes for the cops. He also does some tracking for the cops. He lives next door to Doc on the lake. He has been known to poach on private lakes, smoke weed ect.

The weather has been raining heavy and some flooding in the Loon Lake area. One of the deputies on lookout for more flooding sees some meat floating in the runoff. He decides that it will just wash down the river and he would love some venison. Him and a city worker find 8 packages of unmarked packages. His first is thawed out. The second they open is a human head.

Osborne gets to call the body deceased and he recognizes the face. He never forgets faces and he has done dental work on this one.

Doc's daughter Mallery has brought her boyfriend home to meet him. She does media public relationship and ends up working for the Sheriff to help out because of the media has gathered for the big news event.

This book is a quicker read. A little grizzlier murder. Some beautiful scenery that makes you want to go fishing.
I was given this ebook to read and in exchange asked to give honest review of it by Netgalley.
06/18/2013 PUB F+W/Adams Media Tyrus Books 208 pages ISBN:9781440533563


In the midst of a catastrophic August rainstorm, a grisly discovery shatters the serenity of a summer evening in northern Wisconsin. Moving quickly to prevent a panic among tourists, Loon Lake Police Chief Lewellyn Ferris enlists the forensic and interrogation skills of her close friend and fellow fly fisherman retired dentist “Doc” Osborne. Within hours of launching their investigation, they find themselves faced with a national media circus as Loon Lake becomes the focus of a murderous scenario that links the murder to the race for the U.S. Senate by a woman who is heir to a Northwoods fortune and other, less savory, family traditions.

Meantime Doc Osborne’s eldest daughter, Mallory, enters into a relationship that may put her life at risk — unless her father and Chief Ferris can find the killer stalking the residents of Loon Lake.