The Loner by Lindsay McKenna 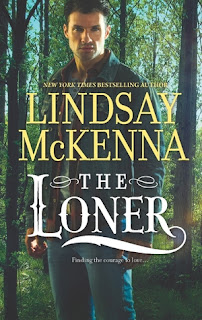 It seems to be that most of all Lindsay McKenna stories have some military theme to them. This is no exception. Dakota is an ex-navy seal dealing with PTSD. So he lives high up in the Teton mountains in a cabin no running water. He hunts for most of his food. He found a wolf pup that a bear killed his whole family and Dakota rescued and raised him. Storm he calls him.

When Dakota was out checking on his traps he runs into a grizzly bear. He takes a beating for he is able to kill the bear. He has his pockets full of items that he was trained to have with him. he uses a tourniquet to slow bleeding, puts pad and duck tapes his arm. He knows he need help fast and his truck is a mile away. He makes it to hospital parking lot.

Shelby is a deputy sheriff and is picking up some paperwork at hospital when she sees a truck park into two spaces and she thinks he is drunk when she sees all the blood. Calls for help and gets him into the hospital. Dakota has seen the doctor once before and she knows what is problem is.

Dakota gets Shelby to take care off Storm till he gets done. He has no plans to stay overnight in the hospital. Dakota tells Shelby that she won't know where he lives. Shelby is a tracker like Dakota and she knows right where his cabin is. She gives Dakota her phone number in case of emergency. He ends up needing it.

Shelby and Dakota end up tracking together to find missing campers and they work well together. Then they end up working too capture two escape convicts that are personal to both of them. They rape and tortured Dakota's older sister and Shelby is the one who tracked them down last time and took them in for it.

They sure encounter a lot of wildlife in the back country. This starts off with lots action and drama and continues throughout the book. It deals with some issues of PTSD that soldiers go through and law enforcement. Dakota helps Shelby to cope with some of the events that she is facing. Shelby helps him to cope with his problems and gets him to talk about what he went through.

I like it that they both end up saving each other at different times. They are able to work to save some of the lost. They are both strong characters and have good points and faults that make them human.

Their are a few love scenes and some scenes describing what Dakota's sister suffered through years ago.

I am sorry for all the soldiers that are facing PTSD and are having a hard time fitting back into regular life. I hope that the drugs work for them to help their cortisol levels even out. Thank you for your service where ever you serve or what ever you do to serve this country and keep us safe. Thank you.

A man at war with himself In all her years as deputy sheriff, Shelby Kincaid never met a man as stubborn as Dakota Carson. Practically eaten by a grizzly bear and still that man insists on returning, alone, to his isolated cabin in the Tetons. Shelby's not even sure why it ruffles her-but she suspects it has a lot to do with the instant, powerful connection she feels with Dakota. If only he'd let down his guard with her....

Ten years as a navy SEAL took its toll on Dakota's body, his mind and his heart. Since being released, he's endured months of painful physical therapy...and brutal nightmares. Dakota wants nothing more than to hide from the world, so why does Shelby's gentle presence suddenly make him question his seclusion? But when Shelby's life is threatened, Dakota knows his warrior spirit won't hide any longer. He just hopes it's not too late
Posted by rhonda1111 at 10:03 PM