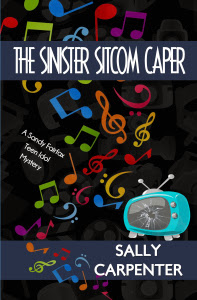 Sandy Fairfax, former teen idol and star of the ‘70s hit TV show “Buddy Brave, Boy Sleuth,” is now a middle-aged recovering alcoholic who realizes that making a comeback can be murder. He’s the guest star on “Off-Kelter,” a corny family situation comedy, and the lowest rated TV show of the 1993 fall season. Before rehearsals barely begin one of the actors drops dead at Sandy’s feet. He investigates, enlisting the aid of two of his new cast mates: a dwarf and an animal actor. During his snooping, we meet Sandy’s ex, his parents and his teenage son, all with their own “situations” going on. During rehearsals Sandy also encounters a beautiful choreographer—could this be love? Will Sandy solve the murder before the Friday night taping of “Off-Kelter” or will the elusive killer cancel our hero before the final credits? This book was inspired by the author’s experience working as a tour guide/page at Paramount Pictures in Hollywood.

About The Author
Sally Carpenter is native Hoosier now living in Moorpark, Calif.

Carpenter also has a master’s degree in theology and a black belt in tae kwon do.

Her short story, “Dark Nights at the Deluxe Drive-in,” appears in the anthology “Last Exit to Murder.”

“Faster Than a Speeding Bullet” was published in the “Plan B: Vol. 2” e-book anthology.

I liked The Sinister Sitcom Caper by Sally Carpenter. It was entertaining. It is funny, drama, and action. Plus we get to see and hear about making a tv sitcom and the different ways things were done when Sandy was the star. The story kept me guessing about what really was going on.

At first I thought the characters were all over the top, and than I was thinking about different teen stars in the past. Thought she got her characters true. I could picture different T.V. stars that I had liked and what mess they made of their lives.

Sandy was a former teen idol who now is divorced father of two teenagers. A recovering Alcoholic. Trying to go back working.
He has a guest role on a new series.

One of the actress Elsie is walking with him and all of a sudden sags to the ground. He gets her medical help right away but she dies. No one really likes her.

The major problem I have with the story is where are the police? No one asks questions or evens shows up to question anyone either after Elsie dies or other situations occurs. The only scene is when Sandy takes something to the police.

The setting is Hollywood at one of the movie studios that has been around along time.

This is the second Sandy Fairfax Teen Idol Mysteries. I would like to go back and read the first book. I hope their is another Sandy Fairfax Mystery coming soon.

I was given this ebook to read for purpose of reviewing it and being part of its blog tour.

Thanks for the great review. You're right about the police not getting involved and I'll remember that for the next books.