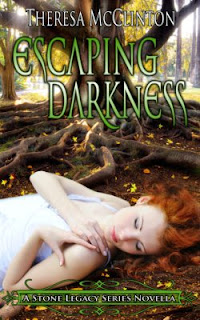 My Review of Escaping Darkness

I did like Escaping Darkness but I feel left out that I do not know the different characters that they briefly mentioned. It does stand alone though.

Tara is dealing with a lot of thoughts of unworthy of love and marriage. She is also dealing with nightmares of abuse she suffered when she was younger. Tara can't hold food down, is waking up nightly and it's making her more depressed. She is in a bad cycle where everything is just making other problems worse.

Tara right now is fighting shame and low self esteem. She wants to hide her secrets. Even though she has not done anything wrong. It is not her shame but the men who hurt her over and over. Tara is offered drugs free of charge.

You can see how it would be tempted to try drugs and alcohol to escape your problems for awhile. When really they just cause more problems down the road.

I like the characters. How her friends don't turn away from her but want to help her. How Tara wants to help others get free so they won't have to suffer like she did and still does. I look forward to getting to know them better in the Stone Guardian.

This is a quick read a novella that is worth your time to read.

She may have spent years in an asylum, but that didn’t make her crazy–just fearless.

Dropped in Moscow with her friends on an impossible mission against underworld forces, Tara is left to her feelings of overwhelming inadequacy. Her boyfriend is a healer, her best friend is “the Guardian,” and everyone else is a powerhouse of awesome strengths. The only thing she has been able to contribute are her memories, which has left her with nightmares of her time spent at the mercy of the evil Sarian–who everyone has gone to fight.

Alone with her emotions, Tara finds herself falling into a city of depravity and corruption. And amidst all this evil is a young man with an agenda of his own, who leads her down a road that will either prove she is a hero at heart, or drag her into a world she’s always feared.

He wants revenge, she wants redemption. And in an underground rings of missing girls and bloody sacrifices, only the fearless can survive…

A long time enthusiast of things that go bump in the night, Theresa started her writing career as a journalism intern—possibly the least creative writing field out there. After her first semester at a local newspaper, she washed her hands of press releases and features articles to delve into the whimsical world of young adult paranormal romance.

Since then, Theresa has gotten married, had three terrific kids, moved to central Ohio, and was repeatedly guilt tripped into adopting a menagerie of animals that are now members of the family. But don’t be fooled by her domesticated appearance. Her greatest love is travel. Having stepped foot on the soil of over a dozen countries, traveled to sixteen U.S. states—including an extended seven-year stay in Kodiak, Alaska—she is anything but settled down. But wherever life brings her, she will continue to weave tales of adventure and love with the hope her stories will bring joy and inspiration to her readers. 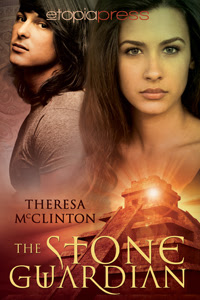 When myth becomes reality, reality becomes a nightmare.
Like any other teenager in America, Ashley just wants a normal life. But growing up in an orphanage for the insane is anything but normal. After endless therapy and increasing medication, her nightmares have only gotten worse.

Probably because they’re not nightmares.

When Ashley’s mysteriously abducted, she finds a reality even less normal than the orphanage. And she discovers something else—she’s no ordinary orphan. Faced with enemies thought to only exist in fairy tales, Ashley discovers she possesses a powerful Maya bloodline. She’s the daughter of an ancient Maya Guardian, whose duty is to protect the Stone of Muuk’ich, an enchanted relic blessed by the gods. But first she must get it back from Sarian, a power-hungry demigod who slaughtered the last guardian—Ashley’s mother. Without the stone, all will be lost.

When she meets Arwan, a hot Belizean time bender, his delicious olive skin and dark eyes make her feel a little less alone. But his gentle whispers and reassuring touch might not be all they seem. How can she balance love and duty when it’s up to her to prevent the rising of the underworld? Especially when the guy she loves might be its crown prince…

Thanks for having me your blog today, and for reviewing Escaping Darkness. I'm glad you enjoyed the read, and hope you do find the time to read The Stone Guardian, which most certainly will catch you up on those characters you missed out on. ;) Looking forward to chatting and hanging out with you and your readers.