A Proposal for Christmas by Linda Lael Miller, Lindsay McKenna 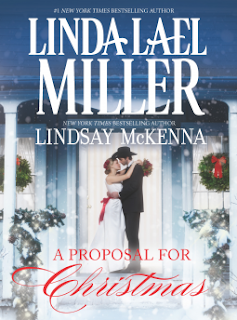 In State Secrets the newly elected Pres. third cousin is wanted for treason. His sister Holly a cookbook author just got back from spending two months in Middle East researching for a cookbook. The secret service needs to see if she is a security leak too. David Goddard is being sent undercover to find out.

I like Holly she is worried about her brother. Raising her nephew Toby. Writing her cookbooks, weekly newspaper article and teaching cooking classes. She loves Toby and raising him the best she can.

David finds out that Holly is in contact with her brother and sending him money. He has to report back what he finds out about him. He falls for Holly fast. But he has been lying to her about his real job.

There is drama, romance, a few love scenes that I skipped over. I really like that she went to her cousins and stayed in the White House to see him take the oath of office.
The Five Days of Christmas by Lindsay McKenna
This is a short novella celebrating 5 days of Christmas with Morgan Trayhern's employees and families. Laura decides that she wants to help bring together Colt & Abby.
Colt's last mission has left him raw. Morgan asks Colt if he will help with the preparation of the different activities because he is just too busy to help his wife.

Abby is a widow of two years. Her husband worked for Morgan in black opts. She is a teacher and helping Laura with different activities.

This is emotional story for different reasons. I shed a few tears at different times. Wish the story was longer and not detailed love scenes that I admit skipping over.

During the 5 days of activities they had a dance, sking, visit to V.A. Hospital, too shelter. banquets , Christmas presents from Santa from Everyone. It is very moving story.
One problem is how fast they fall for each other and get over their problems. Makes a great Christmas story.

Secret Service agent David Goddard never expected to spend his Christmas surveilling the president's cousin. But after weeks of studying her, he finds that Holly Llewellyn's life continues to remain a mystery. Tangled in the controversy swirling around them, David wonders, is it her secrets that fascinate him…or Holly herself?

THE FIVE DAYS OF CHRISTMAS

Morgan Trayhern's toughest mercenary, Colt Hamlin, is looking to lie low this Christmas, but he may just have a change of heart when his matchmaking boss puts him in the path of Montana's prettiest widow.