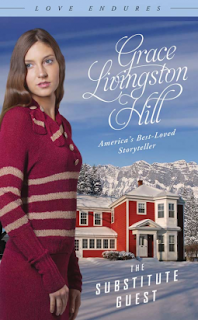 When I read the description I thought it would be a nice story to read on this hot sunday. I had no idea who Grace Livingston Hill was till I was through with the book. She wrote over 100 books and was considered pioneer of Christian romance. So I know their are a lot more of her work for me to read. It told how she was born 1865 died 1947. I just thought it was a story written about 1920s setting.

This was a nice Christmas story. It had heroics, faith, selfishness, greed and good examples to live by. I read it in one setting. I look forward to reading more books by Grace.

The characters were a wide range from high society, to farmers. Too spoiled young ladies, to kind ladies. Too drunks to hard workers. I was really rooting for Alan.

Alan has no family left. He was going to spend his Christmas vacation at a party he was invited too. He wanted to see more of Demeter Cass and see if she was the one for him. Before Alan could leave he needed to get some work done. Alan is a lawyer.

While dropping the paper to his Doctor friend he hears about a desperate lady in the mountain needing a certain medication by 6:00p.m. on Christmas eve. He promised his friend that he would take the medicine to her. It was not far out of his way.

Well the snow storm turned out to be a blizzard. Alan had other problems get in his way. His car broke down on the mountain but close to a farm house. When Alan made his way inside and asked for use of the phone and directions to where he needed to go. Alan found the only way up there now was a three mile walk in the heavy snow even if his car would start again.

When the Devereaux family realized how important it was to get the medicine up the mountain they worked together to help make it possible. Lance would go with him. They helped Alan get into warmer clothing, fed him, got ropes, flashights, shovels and candle lanterns to help them to get up and than back down again.

Through that hike Alan and Lance got close. Lance made it possible for Alan to keep his word. Alan and Lance were offered to stay the night before going back down the mountain. Lance needed to get back home and Alan would not have him go alone after all his help.

The Devereaux family took Alan in and made him feel like he belonged and shared their Christmas and faith with him.
It felt good to read this story. Their are so many people who go out of their way to help each other and we mostly hear about the ones who are causing problems than solving them. It left me with a smile as I enjoyed this story. I want to be like the Devereaux family helping and sharing.

I was given this ebook and asked in return to write a honest review of it by Netgalley when done.
09/01/2013 PUB Barbour Publishing, Inc. 256 pages original title The Substitute Guest (GLH, #20)


When Alan Monteith decides to help a friend in need by delivering a bottle of medicine to a sick woman, he never imagined being stranded in a blizzard. And he never imagined climbing a mountain on foot. But when his car breaks down in front of the ’s home, that’s just what he ends up doing. Daryl Devereaux was looking forward to a peaceful holiday until Alan Monteith arrives. As the young stranger and her brother trudge into the storm, Daryl is left to pray for their safe return, never realizing that night will change their lives forever.