Thread of Suspicion (The Justice Agency #4) by Susan Sleeman 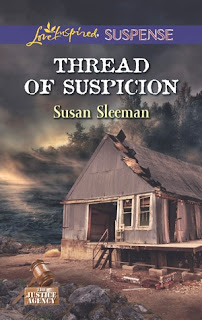 I have enjoyed all four books of the Jastice Agency. I wish they could be longer. I have to admit I do enjoyed watching the wonder twins years ago. I can see how twins watching them would be fans too.

The Suspense was good but I did guess early on who the bad guy would turn out to be and why. But their was more going on then I figured out. Their was also a lot of Dani's past revealed.

Romance was weak. Everyone around could see that they were attracted and they were fighting it.

Lots of action. Every time it seemed to calm down something else would happen and the tension was high.

Inspired message was good about God's timing is always right. We might not agree with it, But his way is best. He answers Prayers too.

I really like the characters in the book. I can't wait to see if Derrick story gets told to.

The Justice Agency is run by 5 siblings. They have all law enforcement backgrounds in different agency. After their adopted parents were murdered they came home to find their killers and formed the Justice Agency.

Dani was with the FBI working cybercrimes. She has been sent into see if Luke Baldwin is a traitor and his software has been compromised. Dani is also the youngest most protected by her brothers especially her twin.

Luke was a Navy Seal and started a company risking everything to make military phones safer, because he saw the need after his best friend was killed because their phone was overheard. His company is going to demonstrated for the military. When a phone call said it was hacked into.

I enjoyed reading the Thread of Suspicion.
I was given this book by the author and asked to give honest review of it. Also give this web address.
http://www.susansleeman.com/books/the-justice-agency/


Description below taken off of Amazon.

When someone sabotages former navy SEAL Luke Baldwin's "unhackable" software, there's more than his reputation at stake. Faced with treason charges, Luke turns to Dani Justice, a computer expert and skilled investigator. She's eager to dive into the challenging case…until she uncovers a devastating connection. The hacker framing Luke has a personal, deadly history with Dani. Luke's code of honor and his growing feelings make him resolved to protect the sweet, strong woman he knows is more vulnerable than she'd admit. But what good is his training or determination against an enemy who can hack into any system and find them wherever they hide?

The Justice Agency: Family and law enforcement go hand in hand
Posted by rhonda1111 at 5:06 PM