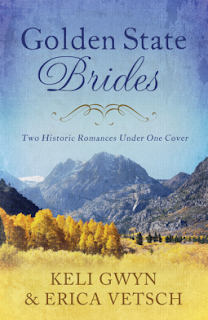 My review of Golden State Brides

This has two separate stories in it. I have read the first and will review it and then read the next one and review it here too.
A Bride Opens Shop in El Dorado, CA
4 STARS
The story takes place in 1870
Elenora and her daughter Matilda Watkins have left their home to move the El Dorado. Elenora has accepted the offer to become a partner in a store their. She is bringing some money to put into the business. When she gets there she finds that Mr. Rutledge was not prepared for her to be a woman. He does not want a partner that is a woman.
Elenora is not giving up like that. There is a empty store across from Mr. Rutledge's store. She decides to open her own store and run it herself. She had been working in her father's store her whole life. But he did not want her to be a partner but her new stepbrother was welcomed.
Elenora is not giving up. She is smart, full of ideas and not afraid of competition. She wants to make a home for her daughter. Elenora is prepared to learn what she needs to know. Is not afraid to try new things. She thinks outside of boxes when she keeps facing new trials.
Milo Rutledge lives with his mother or she lives with him I should say. He has a lot of friends in town. He knows he is a better businessman than Mrs. Watkins. He will keep his customers. Milo lost his baby and wife in a fire. He has had a hard time trusting woman since then.
Matilda is a talkative little 10 year old. She takes to Milo and his mother. She wants him to marry her mother and became her father.
Mrs. Rutledge is the one who had written all the letters back and forth to Elenora. She hid the facts from her son that she was a female. Mrs. Rutledge offers to watch Matilda while her mom works in the store. She also will teach her to cook and other things. She also wants them both to eat with them each night.
I really liked Elenora. I forget how far woman have come compared to the options they had back then. It was fun to read and root for her to succeed. Elenora learned also to trust in her prayers are answered. I did think it was a little bit long. But the story unfolded a piece at a time.

A Bride Sews with Love in Needles, California by Erica Vetsch

This story takes place during WW1. I learned a lot reading this book. I did not know what Harvey girls were. It also talked about the bad flu that was world wide epidemic. It tugged on your emotions.

Meghan decided that she wants to do her part in the war effort. She also wants to see more of the country. She wanted to sign a contract for six months to be a Harvey girl. If she would go to Needles their was bonus money if she stayed the whole time. They would stay in dormitory and be safe.
Natalie Daviot also wanted to go to Needles and be a Harvey girl. She needed the money. Natalie has lots of secrets. Natalie and Meghan met on the train. They got assigned to be roommates.
Caleb McBride trains horses for the army. He has lots of secrets too. He is full of pride. The town of Needles is not very kind to Caleb. In fact some are very cruel to him because he won't sign up to fight in the war. His story unfolds a little at the time and keeps you wanting to know his story.
I enjoyed reading A Bride sews with Love in Needles, California.
Both stories are well told and keep your interest. I would read more of their works in the future. They are Christian romances but don't preach. They are clean stories, mention prayer and a few scriptures that fit in with the story very well.
I was given this ebook and asked in return to give honest review from Netgalley.
publication: September 1st 2013 by Barbour Books 640 pages(ISBN13: 9781624162367)


Bask in two historical romances from sunny California. A willful widow and a determined merchant find themselves fighting for a town’s business—and against their growing attraction. Who will win this contest of wills? A Harvey Girl waits on doughboys and meets a local horse breeder whom the townsfolk have branded a coward and profiteer. Will pride keep them forever apart? Are they destined for golden love, or will the sun set on romance?