A Weaver Beginning by Allison Leigh 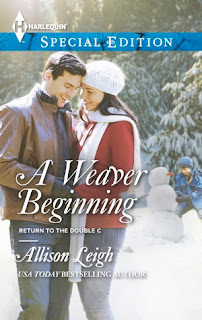 A Weaver Beginning was a charming romance. I liked the characters, the town, the Weaver family. The plot was small town life. It did have two love scenes that I skipped over.

Sloan McCray has spent the year in Weaver and is not sure what he plans to do next. His twin wants him to stay in Weaver. He does not see himself as a hero. As a hard time dealing with his memories and guilt.

Abby Marcum has just moved too Weaver with her young brother on New Years eve. The house she bought heat is not working. Their is lots of snow in driveway as she tries to unpack her car. She is 23 and the new school nurse who will start in a few days.

Dillon is her 7 year old half brother that she has raised for the past two years. He is cute but really shy. He is afraid when he sees the stranger with snow shovel coming over from next door.

Sloan helps her carry stuff inn and when he realizes that the house is cold and that she plans to heat with fireplace till after the holidays. He brings her wood starts the fire, shovels the driveway for her before he tells her who he is. A sheriff deputy who was in the news for getting biker gang busted up working undercover deep undercover.

Dillon takes to his neighbor when he finds out he has a badge and gun.

I smiled a lot reading this story. Dillon is cute and can really say the wrong thing at the wrong time as all kids tend to do sometimes.

I was given this ebook to read and asked to give honest review of it when done by Netgalley and Harlequin.
publication: September 17th 2013 by Harlequin Special Edition 224 pages ISBN 0373657706

USA TODAY bestselling author Allison Leigh introduces readers to a reluctant hero—and the woman who just might heal his wounded heart—in this newest addition to her popular miniseries, Return to the Double C!

Small town deputy Sloan McCray was making amends for his past. They called him a hero but only he had to live with the difficult choices he'd made. And he certainly wasn't prepared to fall in love again, not even with his beautiful—and innocent—new neighbor, whose very presence was a balm to his troubled soul.

There was no doubt in Abby Marcum's mind that Sloan was the guy for her. Though she'd moved to Weaver, Wyoming, to make a better life for her little brother, she saw her future with Sloan. Now she had to convince the man who felt unworthy of love that she and her heart were his for the asking….
Posted by rhonda1111 at 8:41 AM