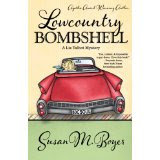 4 STARS
I liked it so much I went and bought the first Liz Talbot Mystery to read soon. The characters were good, some kooky, some bad guys and even one that died years ago. The plot was twisty and I was not sure who did what. The story was easy to follow, funny, action packed, romantic and full of drama.

Liz Talbot is a P.I. in her hometown. She has her high school friend Colleen who died back then come and visit her. Colleen even helps protect her sometimes. Liz romantic life is a mess. Her one ex-husband is back into the picture and wants to remarry her. She wanted that for years. Her partner in the P.I. is another ex-husband's brother. Who is coming back for her.

Her new client Calista McQueen looks like Marilyn Monroe and has a lot in common with her. She is afraid that someone will kill her on the day Marilyn Monroe died. She even married a baseball player named Joe. Her mom even gave her into the foster care system so that she would be like Marilyn. She left home 18 years ago and has not seen her mom or first husband since than they don't even know what name she is using now.

Liz's brother is the Chief of Police and even wonders if Calista is all there. It did not help that Calista was wearing disguises so she did not look like Marilyn.

Then her life coach was murdered. Liz found out that Calista had millions of dollars. Her deceased husband won the lottery jackpot the day he was murdered. Liz feels like the danger has to be related to the money. Then some scary things happen to her.
Liz should have died but her friend Colleen interfered. Liz is afraid that Colleen will get into trouble for helping her. Colleen sure brings some laughter and funny scenes with her.

Liz is going to protect Calista, she is also going to be a friend to her too. She does a good job investigating with Nate as they try to add romance to their partnership. They have the fact live in two different towns and neither one wants to move.

It is full of action, romance, danger, paranormal and fun characters that I enjoyed reading about. Kept me guessing to the end.
I was given this ebook to read and asked in return to give honest review of it by Netgalley and Henery Press.
09/03/2013 PUB Henery Press 268 pages ISBN9781938383564

Description below is taken off of Netgalley

The anticipated follow-up to the Agatha Award-Winning LOWCOUNTRY BOIL.

"Is there anything more enticing than curling up with a thrilling whodunit that keeps you guessing until the very end? Susan Boyer delivers big time with a witty mystery that is fun, radiant, and impossible to put down. I LOVE THIS BOOK!" – New York Times Bestselling Author, Darynda Jones

Liz Talbot thinks she’s seen another ghost when she meets Calista McQueen. She’s the spitting image of Marilyn Monroe. Born precisely fifty years after the ill-fated star, Calista’s life has eerily mirrored the late starlet’s—and she fears the looming anniversary of Marilyn’s death will also be hers.

Before Liz can open a case file, Calista’s life coach is executed. Suspicious characters swarm around Calista like mosquitoes on a sultry lowcountry evening: her certifiable mother, a fake aunt, her control-freak psychoanalyst, a private yoga instructor, her peculiar housekeeper, and an obsessed ex-husband. Liz digs in to find a motive for murder, but she’s besieged with distractions. Her ex has marriage and babies on his mind. Her too-sexy partner engages in a campaign of repeat seduction. Mamma needs help with Daddy’s devotion to bad habits. And a gang of wild hogs is running loose on Stella Maris.

With the heat index approaching triple digits, Liz races to uncover a diabolical murder plot in time to save not only Calista’s life, but also her own.
Posted by rhonda1111 at 11:05 AM