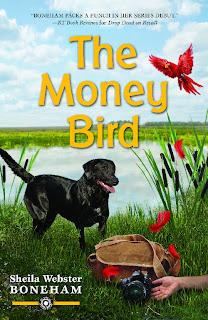 Animal photographer Janet MacPhail knows that trouble is in the air when Labrador Retriever Drake fetches a blood-soaked bag holding an exotic feather and a torn one-hundred-dollar bill during a photo shoot at Twisted Lake. One of Janet’s photography students reports seeing a strange bird at the lake, but he turns up dead before Janet can talk to him. When she learns that the mysterious retreat center near the lake is housing large numbers of tropical birds, Janet is sure there’s a connection and decides to investigate between dog-training classes, photo assignments, and visits to her mom at Shadetree Retirement. With help from her Australian Shepherd Jay and her quirky friend Goldie, Janet is determined to get to the bottom of things before another victim’s wings are clipped for good. 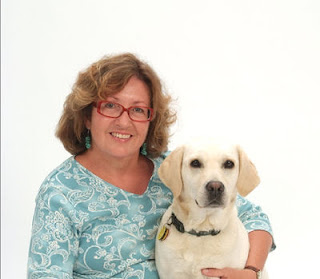 Sheila Webster Boneham is the author of 17 nonfiction books, six of which have won major awards from the Dog Writers Association of America and the Cat Writers Association. She is also the author of Drop Dead on Recall, the first in the Animals in Focus Mystery series. For the past two decades Boneham has been showing her Australian Shepherds and Labrador Retrievers in various canine sports. She has also bred top-winning Aussies, and founded rescue groups for Aussies and Labs. Boneham holds a doctorate in folklore from Indiana University and resides outside of Wilmington, N.C.
Website - http://www.sheilaboneham.com

MY REVIEW: The Money Bird

The Money Bird made me think I want a puppy. Then looked around at my two sleeping dogs in my bed and thought again. Their dogs are so well trained of course they go to train them once a week or so. The animals are a big cute part of the book.

Janet MacPhail is a animal photographer. She owns a Australian Shepherd named Jay and a orange tabby Leo. She is dating Tom. She is very caring and curious. Janet's mom is in a nursing home and a lot of the time does not know who she is. Or does and wants to go home.

Tom he owns Drake a Labrador Retriever. Tom is a ethnobotanist. He teaches at the college. Just got back into town after a couple of months off researching.

The mystery starts off right away when at a dog training exercise at a small private lake with a island in the middle. Drake instead of bringing back what he is supposed to brings back a bag with a torn $100 bill and a long feather inside with blood over the bag from the island.

Their are some funny scenes in this book. Starting with the day after at the veterinary office where she is doing a day in life series. It gets funny but not going to spoil your fun.

I guessed just a little of the mystery but most of it was surprised at what and who was doing what. So lots of twists.

People who do not like animals probably won't enjoy this mystery because animals and birds are such a big part of the story. I would love to see the art show with all the bird exhibits and wood panel they talk about.

I did not realize how big a problem animal smuggling is. I have seen some beautiful birds and thought I would like it. Then I realized how long some of them can live and what a mess they make. So I will stick to my two dogs and cat. I would like to train my animals more. I never thought to get a fan for dog in car. My daughter's dog loves the car but I will only take him for rides when a lot cooler temps.

I would read another mystery book by Sheila in the future especially would like to see Janet and Tom again.
I was given this ebook to read and agreed to write a honest review of it for the blog tour.

The Money Bird: a Rafflecopter giveaway

Thank you for being part of this tour!

this one looks great!!

My little Cenya passed away a year and a half ago. She was the sweetest little shih Tzu and I miss her every day. She gave us a huge smile everyday.

Marjorie, I'm so sorry for your loss. Shih-tzus are great little dogs. I wrote an article for the Fancy Publications' special interest magazine on Shih-tzus several years ago, and spent 2 weeks pup sitting a friends' Shih. She was a funny, sweet little dog.