Search the Dark (Watcher in the Dark) by Marta Perry 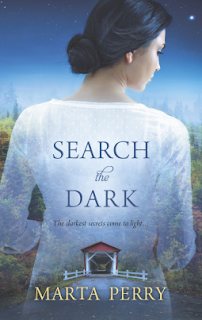 Search the Dark title fits this book. It is a suspenseful novel till the end. It does a good job of keeping me guessing. The ones I wanted to be guilty were not. It is set in Amish town but Meredith is not Amish. Her father was but left before he joined the church. So Meredith has lots of Amish relatives. It is a clean read with lots of drama thrown in.

This is book two in the Watcher in the Dark series. Book 1 was Home by Dark. The Plot is Meredith's Amish cousin asks her to keep looking into the death of Aaron. When Rachel moved back home the two friends remembered fallowing Aaron around the summer he died and made up stories about him as a knight and his love Laura a Englisher. They had found a note for Aaron that he never received.

Meredith did not know what she could do but agreed to ask around. Her and Rachel could look at their scrapbook again to see if they noticed anything else.

Zach Randal left town when he was a senior because he was accused of being a thief by Meredith's mother. Zach wanted Meredith to go with him but she refused. Zach is back in town to take care of a house he was left by his stepmom.

The first person Zach sees is Meredith. He thought he would no longer feel anything for her. But he was wrong. He is staying at the bed and breakfast across the street from her house. Zach is now a cop. He is interested in the death of Aaron and helps Meredith with ideas of what to look for in a cold case file.

Meredith's mom still does not want her to have anything to do with that boy. Their are others who remember the troubled teenager that Zach was.

Meredith is warned away from a couple of people to stop looking into Aaron's death. Then they get more warnings.

This story keeps you guessing and keeps your attention. I like Meredith and how she takes care of her mom but still sees her Amish family even against her wishes. Zach is a hero I could fall for.
He tries to do what is right and protects Meredith.
I like Marta Perry's books and plan to read more of her work in the future.
I was given this ebook and asked to give honest review of it in exchange by Netgalley and Harlequin.
publication: September 24th 2013 by Harlequin HQN 352 pages ISBN;0373777868


Sometimes the past is best left buried

Meredith King longs for escape. Life in Deer Run is stifling, the Amish town too small for a modern woman staying just to care for her ailing mother. When a friend enlists her help in clearing the name of an Amish boy whose decades-old death is still shrouded in mystery, she welcomes the distraction. But when a ghost from her own past reappears, there is suddenly a lot more at stake.

Zach Randal was always a bad boy, and their romance never had a chance. As charming as ever, he returns to town on the heels of a deadly new threat. Is Zach as dangerous as Meredith was always led to believe? Or is the attraction they both feel the only thing that can save them from harm?