The Advent of Murder by Martha Ockley 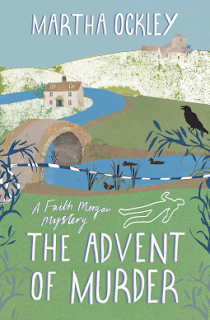 I got confused in part of the story because I had not read book 1 and I am not familiar with some of the English terms and church system. But those are more my faults than with the story. I did guess early on who the murder was and motive. Still enjoyed the book.
Faith is a interesting character. She used to be a cop and now is a Vicar. She used to date Ben when she was on the force. Faith still can't leave the mind set of a cop and finds herself investigating the murder. People she talked to got the impression she was a cop still and were surprised to learn she was clergy.

Ben detective in the murder case. Still asks and tells her things. I am not sure why they broke up. Don't know if Vicar can marry or not.

A young man was murdered he was close too two other teens and was a member of a choir. He helped take care of his Uncle who is a drunk. His mom died this past year.

It is the busy Christmas season. The first one that Faith is in charge of. She is on her way to a member's house when she sees a bunch of police. Oliver Markham is going to play Joseph. It is his farm that the teenager is found and looks bad for him that he did not call the body in.

I really want to go and read the first Faith Morgan Mystery and learn more about Faith and her choices she has made.


Description below taken off of Netgalley

.Faith Morgan, former policewoman and vicar of Little Worthy, visits Oliver Markham's farm in the run up to Christmas, only to discover the house surrounded by police cars. A body has been found in the local River Itchen, which turns out to be that of Lucas Kemp, a local boy and chorister. Markham is charged with his murder. Through her connections with Winchester Cathedral Faith is drawn into the investigation, discovering that Lucas had dropped out of college and that his mother had died a few months previously. There is a question of drugs, and a rivalry over Lucas's distraught girlfriend - the choir is a hotbed of tensions. Lucas's unsavoury uncle, and a local drug dealer, both come under suspicion, and Ben, Faith's police inspector ex-boyfriend, has to rescue her when the drug dealer turns nasty. But the actual murderer is none of the above ...
Posted by rhonda1111 at 5:18 AM