Falling For The Teacher by Dorothy Clark 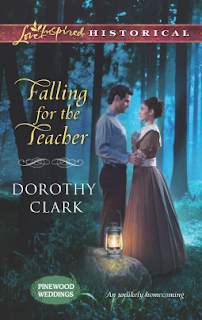 Falling For The Teacher by Dorothy Clark
4 stars

The setting for this story is 1841 Pinewood Village New York
Sadie Spencer comes home after four years away. She has to deal with lots of problems right off the bat.

It deals with some issues of blame, forgiveness. memories and illness.
Sadie was attacked four years ago in the woods by her house by Payne Aylward. She still suffers nightmares and does not want to touch any man. Has no plans to
ever marry. The whole community knows about it. Payne was never caught.

Sadie has come home because of news of her grandparents health problems. Sadie was raised by her grandparents when her parents died when she was little.
Her grandmother has memories problems. Sometimes not even recongizes her. Her grandfather Manning had a stroke. (Not sure if they called it that) his one side
is useless.

She finds a stranger in her grandparents house Cole Aylward. Cole comes a lot since Manning can't get around. He also eats with them most days. Cole got to town right after
the attack and even tried to track his brother. He has tried to make up for the trouble his brother caused. He comes carrys Manning from bed to table to different
rooms. (I have dealt with a stroke leaving me so half my body did not work. Never thought how hard that would be without wheelchairs and modern medicines)
Cole even manages the Townsend mill and lumber camp.

Sadie does not want him around since he looks a lot like his brother. She does not trust him. She thinks he must have ulter motives. Like stealing from the mill.

Cole is smart and a hardworker. He has tried to makeup for what Payne did. He wants to know why Payne has changed since he last saw him. He has gone out of his way to
the Townsend family. The town was not very welcomed to him and blamed him too for his brothers fault.

Sadie has some good friends from childhood that have had their own stories told in other books of this series. I would love to read them too.
It is a clean read.
I was given this ebook to read and asked in return to give honest review when read by Netgalley & Harlequin.
publication: September 3rd 2013 by Harlequin Love Inspired Historcal 288 pages ISBN:0373829795

Love Is Never Where You Expect….
Though she once fled from Pinewood, Sadie Spencer can't stay away when her ailing grandparents need her. But she never expected to come face-to-face with the brother of the man who caused her to leave town. Sadie doesn't care how honest or kind Cole Aylward may seem—she isn't about to let him continue managing her family's business.

Cole has worked hard to prove he's nothing like his brother. All he wants is to try to make up for the hurt Payne caused her family. But slowly Sadie's quiet determination and bravery helps him face his own fears. Can Cole convince her he's a man worthy of the trust she longs to give?