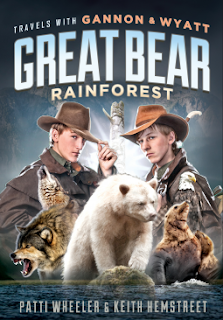 What a fun adventure series. I learned a lot and it was exciting book too. Had no idea what a spirit bear was. I also did not know where the Great Bear Rainforest was either. I know I will be on the lookout for more books with Gannon and Wyatt in the future. This is a clean read that is full of danger, travel, wildlife and great scenery too.

Twins Gannon and Wyatt and their parents get offered to come on a trip. they have to leave the next day to come. Their family loves to travel. So their family was going to join Captain Colin to take some famous environmental scientist to study the Great Bear Rainforest and see the spirit bear and his habitat than to volunteer at a whale research lab and help repairing it after storm damage.

They were told about bears and what to do by their guide Alu. She was a member of the First Nation people of Canada. They were not expecting a petite teenager.
The first area they went to they had no luck the only bears they saw had died in their den of starvation.

The Captain Colin and Dr. Brezner went to shore to search out the spirit bear and they disappeared. Neither radio a problem. Gannon and Wyatt's parents took the smaller boat out to find them and more trouble happened.

I read the book in one setting did not want to put it down. It was a exciting read. I was surprised to find out that their is really a Gannon and Wyatt that travel around with their parents and helped come up with the stories. You can even follow them online the website is at bottom of this post. I know I want to see their photos. I think this book can be read and enjoyed by a wide audience.
Makes me want to go exploring. At least to a zoo.

Gannon and Wyatt can’t wait to trek into the Great Bear Rainforest in search of the mythical spirit bear, but surviving in this unforgiving wilderness proves more challenging than they could have ever imagined. When members of the expedition go missing, the brothers bravely set out on a search-and-rescue mission. Soon they find themselves lost in a forest teeming with grizzlies, wolves and mysterious gunmen. Guided by the wisdom of the First Nation people, the Gannon and Wyatt uncover a sinister plot and must risk everything to save those who are missing and restore balance to the Great Bear.

In the tradition of the historic journals kept by explorers such as Lewis and Clark, Dr. David Livingstone, and Captain James Cook comes the adventure series Travels with Gannon and Wyatt. From Africa to the South Pacific, these twin brothers have traveled the world. You never know what they will encounter as they venture into the wild, but one thing is certain¾wherever Gannon and Wyatt go, adventure is their constant companion.

You can find Gannon and Wyatt’s blog, photographs, and video footage from their real-life expeditions at travelswithgannonandwyatt.com.
Posted by rhonda1111 at 8:26 PM