Glory, Glory by Linda Lael Miller & Snowbound with the Bodyguard by Carla Cassidy Together in one book! 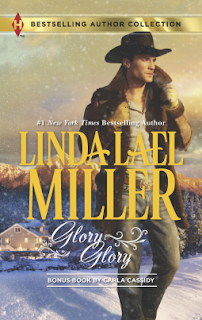 Glory, Glory starts right off with drama and keeps it going for the rest of book. Their is a lot of sex scenes
that I skipped over.

Glory has come back to her home town after leaving when she was 18 without saying goodbye. Her mom is getting married.
Glory is meeting a friend after she is done with Christmas pageant practice. During the practice she recognizes a little girl looks just like her grandmother. She figures out right away it has to be the baby she gave up. She finds that Lisa is being raised by her father.

Glory feels that he deceived her. Jesse feels angry that Glory Just left him without saying goodbye. He is shocked that the niece he is raising after the death of his brother is actually his own daughter.
Jesse is about to be engaged when Glory comes back in his life.

Glory now she knows where her daughter is she wants to be part of her life. She moves back and gets a job in the local bank.

They both have to get over their past feelings and hurts to doing what is best for Lisa.
Snowbound With The Bodyguard by Carla Cassidy
4 stars
Wild West Bodyguard miniseries

This story had drama, suspense, romance and danger. Also had love scenes that I skipped over.

Janette Black is a high school dropout waitress on the run. She is smart and caring. She dropped out of school to nurse her grandmother. She is scared now for herself and her baby. She gets a ride to a few towns away where there is a bus that she hopes will get her and her son away. When she gets settled she plans to bring her grandmother to her.

She falls a sleep while waiting for the bus to come but because of the weather it will be another day at least. She walks to pay phone in snow and calls motel but it is full up. She sees another business with lights on and hopes they can help her.

The West Bodyguard is only business with lights. Dalton lost track of time and weather and was on his way out when he runs into Janette she offers to hire him for the night protecting her from the weather.
Dalton takes her to his apartment two blocks over and spends the night at his landlords. He realizes that Jane has lied to him and is scared of something. But with the town closed down and snowing so hard he can keep her safe for the night.

It would be hard to have no one to trust. She can't go to the police since it was a Sheriff she is running from. Jane will do anything to protect her son.

I would like to read other books in the Wild West bodyguard series.
It was very fast paced story. Dalton makes a great hero, he has been hurt in the past but he is determined to help Jane.
I was given this ebook to read and asked to give honest review of it from NetGalley and Harlequin.

For Glory Parsons, "home for the holidays" wasn't exactly the stuff of sing-a-longs and sleigh rides. In fact, she dreaded it. Dreaded having to face the things she'd lost—her brother, a casualty of war; and Jesse Bainbridge, a casualty of her own weakness. She'd never been able to tell Jesse the reason she'd left him abruptly ten years ago, after she'd promised to love him forever. And he certainly didn't seem open to talking about it now.

Jesse had too much on his plate to get involved with Glory Parsons. He was the sheriff of Pearl Lake and responsible for his orphaned niece. So why couldn't he stay away from the woman? She drew him, just as she always had. But there would be no kisses under the mistletoe for them until he knew the truth. If he was strong enough to face it.