The Stranger You Know by Andrea Kane (Forensic Instincts #3) 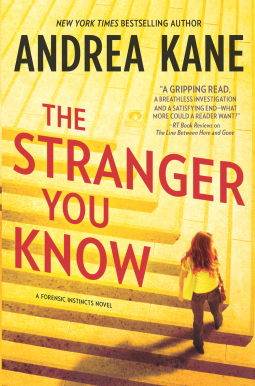 I like Forensic Instincts. This is the third book in the series. It is good except for the crimes committed, that part is not a fun topic. I like the team of characters at Forensic Instincts. The plot has twists some I expected and others I did not guess at all. I should have guessed more answers.

Their is case that Forensic Instincts has been hired to look into. It happened fifteen years ago and it ties into a case that is close to Casey past. A father has cancer stage 4 and he wants his daughter found before he dies. Patrick brought the case to FI.
Casey friend in college was kidnapped, raped and murdered. The killer was never found. This case is close in details that they think they are connected.
Casey knows she is emotionally close to the case but she is still going to take lead because it is her company. Her past, The reason for which she started the company.
Clair is looking for clues when she is drawn into a rape scene somehow. Clair calls the cop and tells him what she saw. He has worked with her before so he goes to look for the body and crime scene.
Casey it's a phone call saying why waste her talent on a cold case when she can find a warm body. That a blood chain has been started and it will end with her death and rape.

FI team does not plan to let that happen. Casey is not going to stop working on the missing girl case because she is being threatened. Of Course they want to stop this new killer too before he kills again. The cops are willing to work with FI on both cases.
The murdered girl is small and a red head like Casey. She is a college student. She was on her way home when she disappeared.
Mark brings his skills as a Navy seal and former FBI agent to FI. Ryan has lots of teck tools. He is smart, good looking and likes Clair. Clair is a physic who connects with objects and sees the crimes more than she wants, but can't see who he is. Patrick a retired cop and FBI Agent by the book. Casey is smart and a profiler they make a great team. They also have Hero a retired FBI dog because he gets sick in planes.
Casey's calls her boyfriend asks for his help. Hutch is a FBI Agent profiler. He lives in Virginia but comes as soon as he can to help catch the guy and keep Casey safe.
They work together to solve cases. When they get a case they put lots of hours in it especially if they are trying to save someone.
It is a good story and I want to read more Forensic Instincts books. I would like to see and learn more personal information about Mark and the others members of FI.
It is well told story that works. I did not want to put the book down but I could not stay up longer and read the rest first thing this morning.
There were some love scenes that I skipped over.
I will definitely read more books by Andrea Kane in the future.
I was given this ebook to read and asked to give honest review of it in exchange by NetGalley & Harlequin.
publication: September 24th 2013 by Harlequin MIRA 368 pages ISBN: 0778315010


Description below taken off of NetGalley


It begins with a chilling phone call to Casey Woods. And ends with another girl dead.

College-age girls with long red hair. Brutally murdered, they're posed like victims in a film noir. Each crime scene is eerily similar to the twisted fantasy of a serial offender now serving thirty years to life—a criminal brought to justice with the help of Forensic Instincts.

Call. Kill. Repeat. But the similarities are more than one psychopath's desire to outdo another. As more red-haired victims are added to the body count, it becomes clear that each one has been chosen because of a unique connection to Casey—a connection that grows closer and closer to her.

Now the Forensic Instincts team must race to uncover the identity of a serial killer before his ever-tightening circle of death closes in on Casey as the ultimate target. As the stalker methodically moves in on his prey, his actions make one thing clear: he knows everything about Casey. And Casey realizes that this psychopathic won't stop until he makes sure she's dead.