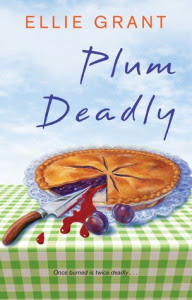 Synopsis
Unjustly accused of cooking the books, Maggie Grady is forced to retreat from her high-flying New York financial career to the town where she grew up. Her aunt Clara greets her with open arms and a job at the family-owned business that has baked the best pies in the South for over forty years. Unfortunately, while Maggie is determined to return to banking, her reputation there seems permanently in the pits. That is, until her old boss, Lou, visits with news that he’s found the real crook. Before he can reveal the details, though, Maggie finds his body right behind the pie shop.

With only her own word that Lou planned to exonerate her, Maggie is in the spotlight. The police seem to suspect that Aunt Clara’s damson pie may not be just dangerously delectable, but downright deadly. Maggie doesn’t just have her own name to clear; she has to make sure that her aunt’s beloved business isn’t harmed, either. Yummy local reporter Ryan Summerour appears eager to help, and Maggie can’t help hoping that it’s not just the police who find her a person of interest—but Ryan, as well. She’d thought it challenging to make the perfect pie crust that Aunt Clara demands, but that turns out to be nothing compared with finding a murderer. . .


About This Author
Ellie Grant writes award-winning, bestselling mystery fiction as themselves, J.J. Cook and Joyce and Jim Lavene. They have written and published more than 60 novels for Harlequin, Berkley, Amazon and Gallery Books along with hundreds of non-fiction articles for national and regional publications. They live in rural North Carolina with their family.

The major fault of this book is I want to eat lots of pies. They sound so good. Flakey crusts. In the back of book does have some pie recipe but It should come with pie, don't you think?

A lot of the setting is at the pie shop or talking about pie and having to make good sounding pies.

Maggie is the main character. She is smart, selfish and now that her busy dream life has been taken away from her, She realizes how wrong she has been not to spend more time with her Aunt.
Maggie was working for a bank until she was accused of taking millions from her bank. The bank froze her accounts, took all she had leaving her with not even enough money to go home.
(I wonder how the bank could take her apartment and everything even her clothes) They don't even press charges against her.

Her Aunt Clara and her Uncle Fred took Maggie in when she was four after her parents were killed. Since her husband's death Clara has not made a lot of good decisions. She has kept the Pie in the Sky open. She is glad that Maggie has come home. She loves her and plans to teach her the family's secret to making good pie crusts.

Maggie's boss comes to her hometown and tells her that he found out who had really stolen the money and he has called a press conference for tomorrow where he will announce the real thief.
Next time Maggie sees him he has died behind Pie in the Sky.

Now things get even worse for Maggie as she as been a person of interest in the death of her boss.

The mystery of who the thief and killer is good. There are a few good suspects for Maggie to look into. I was kept guessing till the killer let it out about something.

There is good drama and action and even some romance as Maggie tries to clear her name. At the same time someone is trying to make Clara sell her land so he can build a office building for doctors.

The ending is setting up for another book that sounds good I hope it is going to come out quickly. I will want to read it but first make sure I have some pie on hand to go with it.

I was given this ebook to read and agreed to be part of its blog tour and give honest review of it.

Just add a comment about Plum deadly leave your name and email.
Contests starts on Sept. 10 till Sept. 17 midnight Mountain time.
Winner will be emailed and have two days to respond before another winner will be chosen.
I enjoyed it. So I hope you enter so you can too.
Posted by rhonda1111 at 3:43 AM

This was a great read. And I agree that it should have came with pie. :)

Thanks for the giveaway, loved the review.

Great review, thank you. I can't wait to read the book.

Thanks for hosting us here today! In the next book, Murderous Mince, we'll include a slice of pie!

I actually read this weeks ago and am still craving the pies! I just need to remember to buy when at the store. This book has left me with strong cravings.
Can't wait for Murderous Mince.

I'd much rather have a career baking pies than working in a bank---I think she should consider herself lucky. And I now want to eat a good pie, too.
suefarrell.farrell@gmail.com

I know the story and picture of the pie looks and sounds so good.
I finally bought the pie this evening and telling my daughter about book and craving it. She ended up buying a pie too.