White Christmas by Diana Palmer 2 stories in one book 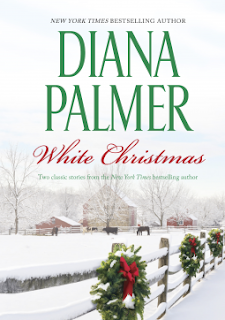 Woman Hater is about two people who had been hurt in the past and don't plan to be hurt again.
Winthrop was hurt both physically and in his pride. He especially doesn't want to have anything to do with someone from rich society.

Nicki blames her father for her mother's death. She has turned away from him and his money. When her fiancé found out that she refused her families money and wants to her earn a living now. He left her because she was now broke.

Now no one knows that she was from money now. She has kept her private life from her boss. Now her boss is going to Montana for a month to heal. He wants to take her with him. His neighbor is the woman he loves Sadie. Sadie moved back home to Montana to take care of her mom.

The story is a theme we see a lot. People who have been hurt don't want to trust a chance on love again. Nicki is a virgin and wants to wear white if she ever gets married and mean it. Their is some heavy petting. Their is plenty of drama. Some romance with three different couples need to workout their troubles. Some history about Montana and ranching.

Most of the story is set on a ranch up in Montana's mountain in late fall with a winter early snow storm.

I like the characters. That their is more going on than just the two main characters.
This is a nice romance to escape into.

I was given this ebook to read and asked in exchange to give honest review of it.

This is a much smaller story. It is a Christmas one too. It is a nice story. mostly characters, little drama, action and heavy makeouts scenes.

Both Tate and Maggie are widowers. Maggie marriage only lasted months before her husband died. She was pregnant at the time. She was left a small ranch.

Maggie's son Blake wants them to spend Christmas at the ranch together before she decides what to do with it.
Blake has a case of hero worship with the rancher next door Tate. When he had spent the summer at the ranch with his grandfather Tate would follow him around.
Tate is not a happy person and has not celebrated the season since he lost his wife and son in car accident.

Blake wants to get them together.
It is a good short read, I did skip over some of love scenes.
Publisher: Harlequin HQN (September 24, 2013) 368 pages


Woman Hater-Everyone in Nicole White's office described their boss's mysterious older brother as a real woman hater. So when Nicki had to tag along with her ailing employer to his brother's Montana home, she was prepared for the worst.

To her surprise, what she found was a man more roughly masculine than any she'd ever met. But Winthrop Christopher's distrust of women ran straight to the bone. Nicki knew she should steer clear of him, but she couldn't hide the feelings he stirred in her. Could she ever teach him to love again?

The Humbug Man-Montana rancher Tate Hollister was the grouchiest widower Maggie Jeffries had ever met. But, as the holiday season progressed, Maggie discovered that Tate wasn't completely immune to the Christmas spirit. In fact, his loving embrace might just be the gift of a lifetime....