The Reunion: The Secret of Cypriere Bayou by by Jana Deleon 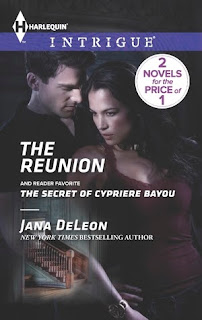 4 STARS
Wow this book had some twists and turns I did not expect at all. But others I figured out or guessed on. This ebook has two stories in it. I am going to review the first one Reunion then read the next one than review. So I don't blur the lines.

Tyler is finally back home in Parish. He plans to open a security business soon as his license accepted by the state. His father wants him to take on protecting Joelle. The last of the three daughters to come back home and spend two weeks at the family LeBeau mansion so they can inheirit the money their mom left them after her stepfather died.

I have read the first story but missed reading the second story. I enjoy reading Jana's stories.
It has a bunch of mysteries in it. Ghosts, hired killers, reuniting lost sisters, romance and danger. All taking place in a big mansion off by itself in the swamp. Their is some humor, some secret passage ways and some love scenes I skipped over.

Joelle has not been back home since she was 4 years old. When after her mother died her stepfather separated the three sisters to different relatives. She receives a certified letter telling her about her stepfather death and what was left for her, but all three girls have to live at the house for two weeks for them all to receiving it.

Joelle has had some scary stuff happen to her lately. Her car vandalized. That a client's husband wanted to know where his ex-wife was. Joelle works with abused women as a social worker and works at a hot line. So she is willing to take off for two weeks.

Joelle thinks she will be safe at her family home but finds that danger has followed her. She is grateful to see her sisters again.


THE SECRET OF CYPRIERE BAYOU

This second book in this ebook collection. It has some of the same features as Reunion. Their is a mystery in a haunted or cursed mansion in the bayou. The home has all these secret tunnels in them that the servants used so they were not seen. A missing girl that was supposed to have gone to the mansion. A caretaker who took off all of a sudden.

Now another woman Oliva has come to the mansion. She is a writer and writes ghost stories after staying in old scary places. The people in near town warn her it is haunted, but that is what she wanted. Of course their is a storm when she comes and her car slides into a ditch.

Oliva thinks someone came into her room while she was in the tub. She hurries and dresses gets her gun and heads downstairs where she heard a noise. Suddenly she is taken by surprise and her gun taken from her.
John has taken the caretaker job. He had no idea someone was going to be their. He was planning to search the house till he found evidence of his missing sister.

They both realize soon enough that they are not the only ones in the house. That person is up to no good. Oliva finds the secret tunnels. They are kept up pretty well.

It is full of mystery and suspense right till the end. Every time things calm down something else happens. Their is one love scene that I skipped over. But I did enjoy the story and wished it did not end where it did though.

I was given this ebook to read and asked in exchange to give honest review by Harlequin and Netgalley.
publication: September 17th 2013 by Harlequin Intrigue 448 pages ISBN:0373697198

Bodyguard to an heiress is Tyler Duhan's idea of hell. The steely, sexy ex-marine has heard—and dismissed—the gossip about the haunted old LeBeau mansion and its "cursed" heiresses. Now the middle sibling—headstrong Joelle—has arrived to comply with her mother's will and reunite with her long-lost sisters.

But no sooner does she move into the house, than Joelle falls prey to terrifying threats and mysterious visions. Tyler, though he's sworn off femme fatales, can't deny his feelings for the Creole beauty. Nor can he let passion distract him. Because falling for Joelle could be a fatal mistake—for them both.
Posted by rhonda1111 at 8:31 AM