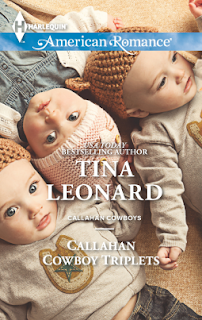 My Review of Callahan Cowboy Triplets

Another Callahan story where the heroine ends up pregnant and the story of how the guy gets her to marry him. It is a fun read.
Their is the same villain who kidnaps someone to force his father to give up the secrets of where two sets of parents have been hiding out after testifying against the drug lords. He also wants to know where the silver is.

I have not read every book in this series only a few here and there. So I don't remember or know all the plot lines in this series. I am sure I am missing some major points. If you want a fast read and escape into a story this works. It just seems close to other of her story points.

I like River Martin's character. She was hired by the Callahan's as the babies body guard. She is smart and tough.
River does fall into some of the family's plot to try and keep Tighe from riding a bull in the rodeo. She is the one that starts the relationship.

Tighe is a confusing character for me. He has liked River for a couple of years but has not really gotten to know her or even date her. He does boast and brags a lot. He is very competitive with his twin and brothers. He is also stubborn and not to smart. He takes off by himself to camp with broken leg. Just gets dropped off and his family is not to worried about him. Tighe is very happy to be having children with River.

Their Aunt Fiona is another strong female character in the book. She is a good cook and manages her nephews. She is always plotting and getting people to do what she wants. She bribes people to.

I was given this ebook to read and asked in return to give honest review from Netgalley.
publication: September 3rd 2013 by Harlequin Romance 224 pages ISBN 9780373754694

His Callahan Destiny?
Tighe Callahan is wild and free as the wind, until he starts chasing the beautiful River Martin. After he catches her—in a midnight seduction he'll never forget—Tighe learns he's about to become a daddy…three times over! Not even an ornery bull can stop him from making River and their babies-to-be his.

Standing down isn't in River's vocabulary. Tighe can insist on doing the honorable thing all he wants—she isn't tying the knot until the cowboy says he loves her. Only, now her wounded warrior's on some dangerous, life-changing quest.

Tighe's finally ready to heed the message of his ancestors: defend his land and claim his woman. Because it's never too late to become the Callahan he was destined to be!