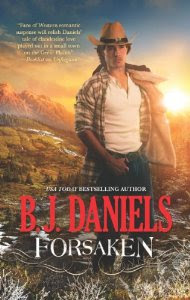 Forsaken basically has three different plot lines going. The main one is good. That has the new Deputy Bentley Jamison from New York answers a call about something is wrong at Maddie Conner's Sheep camp up in the high County.

Maddie's tender a young man has come down from the sheep camp in terror. He is covered with blood, in shock saying that her Long time Shepard is missing. No one is watching her sheep.
So Bentley and Maddie head up the mountain on horseback to find what is going on. Bentley is going up as a cop.

The theme that runs through Beartooth, Montana series is the Sheriff ex-wife Pam has decided that she is going make life terrible for him. She has not seen him in decades. She has hidden the knowledge that he has a daughter and raised her to hate him and the women he loved as a teenager.
The daughter has been arrested for trying to kill him is in a mental hospital. Now he finds her at his house with a baseball bat smashing his belongings and some attacks him from behind and beats him up. Pam has a Judge that is a witness that she never left his ranch and has got a restraining order against the Sheriff.

The third plot line runs into the first and could ruin story if I say anything about it.

Most of the story takes place high in the Montana mountains not to far from Yellowstone. It is a beautiful setting for the story.

The characters are likeable and you find yourself rooting for the good characters and the bad guys to be caught. Some of the characters you are not sure if they are good or bad guys till the story unfolds.

Good suspense in the story kept me from guessing a lot of the mystery in the story. I was able to guess a little bit of what has happened. The story kept moving at a good pace. I stayed up late to finish the book. Did not want to put it down.

There were a couple of love scenes that I skipped over. lots of action, drama, romance and some violence in the book.

I was given this ebook to read and asked to give honest review of the book from NetGalley and Harlequin.


DESCRIPTION below taken off of Amazon.

Big-city detective Bentley Jamison is a long way from home in the Beartooth wilderness when one of local rancher Maddie Conner's ranch hands goes missing. Towering mountains and a small, tight community are as unfamiliar to Jamison as herding sheep, but he's never shied away from a challenge. As the new deputy sheriff, he's sworn to protect every inch of this rough terrain—starting with unraveling a mystery that has left Maddie a wide-open target.

Maddie's as beautiful—and untamable—as the land around them. Like Jamison, she won't back down from danger. But desire that flares hotter than their tempers only raises the stakes when a fierce storm traps them in the high mountains. Caught in a killer's sights, Jamison and Maddie must trust one another, because now survival…and love…are all that matter.

Hey, BJ! I just checked out your backlist of books on Amazon and put several in my shopping cart. I didn't realize that there is usually some sort of intrigue or mystery (and action) in your western romances! That is absolutely awesome! Romantic suspense/intrigue is my usual genre for reading--along with it being western too, of course! I'm double glad I "met" you today! jdh2690@gmail.com