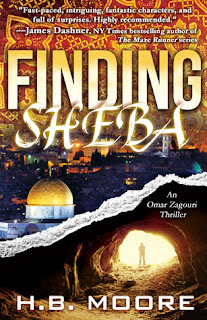 An ancient legend is reborn . . . One that might prove the Bible false.

For centuries, historians have theorized the Queen of Sheba as only a seductive legend, and scholars have debated over the legitimacy of King David or King Solomon. When undercover Israeli agent, Omar Zagouri, stumbles onto a tomb in Northern Jerusalem he unknowingly finds the final clue that threatens to overthrow government claim to the Holy Land, pits wealthy collectors against one another, and sends ruthless archaeologists scrambling to find the queen’s secret burial place. An assassination attempt on the Coptic Pope, His Holiness, Patriarch Stephanus II, is only the first in the chain of lethal crimes. Omar must find a way to prevent the greatest discovery of the century from becoming the most deadly. Heather B. Moore is the award-winning author of several historical novels which are set in Ancient Arabia and Mesoamerica. She is not old and doesn’t remember the time period, so Google has become a great friend. Although she has spent several years living in the Middle East, she prefers to forget the smells. Heather writes her historical thrillers under the pen name H.B. Moore so that men will buy her books. She is also the author of two non-fiction books, and several women’s novels including the co-authored series The Newport Ladies Book Club, the anthology series A Timeless Romance Anthology, and the historical romantic suspense novel Heart of the Ocean. These are all written under her real name so that women will buy her books.

Heather graduated from Brigham Young University with a major in Fashion Merchandising and minor in Business Management–which has absolutely nothing to do with writing novels. But at least she can balance a mean checkbook and color-coordinate her kids’ school clothes.

This is my first book that I have read of Heathers but not the last. I had a hard time putting the book down last night. Read until I couldn't anymore. Boy was it exciting and fascinating to read about the area. I would love to read more of Heather's books.

Finding Sheba tells of a race to find Queen Sheba's casket. That different religions and different nations believe she lived or did not live in certain countries. Some wanted the truth out and others did not if it was against what they wanted found. (I want to find out more facts about the things and events mentioned, countries.)

It weaves the storylines of three groups till they meet and merge again coming up to understanding or finding more about Sheba. I loved it.

Omar is a spy for Israel but he hates his boss and even though he pretend to be different people from different cultures and religions. He likes and respects most of them. While he is pretending to be Palestinian and help build a tunnel beneath the Israeli border they break into a tomb with lots of writing on walls. He is ordered to take the cameras he has already hidden in the tunnel and get back across the border.
When Omar is taking out the cameras in the middle of the night he goes into the tomb and takes pictures and looks at the walls. He is sent on another mission right away into a different country. He gives his two notice.

It also at times goes back to 900 AD and follows Queen Sheba and we slowly learn her story.
The other line it follows is Jade who is writing her thesis on Queen Sheba and is doing an internship with Dr. Lyon's about Queen Sheba but he is murdered. She still travels to Egypt to work on her thesis meets with Dr. Lucas Morel who was working with Dr. Lyon and they work and travel looking into different leads into Sheba's life.
There is so much drama and action in this novel. It has murder, spies, conspiracies, different religions even cannibals. You are never sure who to trust.
I wish I was a writer and could do a better to express how much I liked getting lost into this book. It is a fun clean read.

I was given this ebook to read and asked in return to give honest review of it when finished on their blog tour.
Posted by rhonda1111 at 1:19 AM

So glad you enjoyed FINDING SHEBA. Thanks so much for the review!