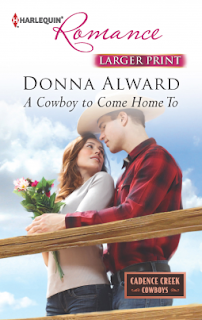 A Cowboy to Come Home to by Donna Alward

This is a nice romance story to read. I liked the characters. it was fun and pleasant escape.
It is a clean romance.

Melissa Stone owns the flower shop. She has been divorced for three years after she got her husband in bed with another woman. She also found out her good friend Cooper knew and did not tell her. Melissa has not talked to Cooper since. She avoids him.

Melissa had a crush on Cooper years ago but he did not see her as a girl. Then her husband took notice of her.

Cooper was not interested in Melissa when she had a crush on him. Then when it was too late he realized that he loved her. He did not know how to tell Melissa the truth.

Now they are talking and trying to see where it might lead to. If they are both willing to risk their hearts again.

Fast read. It leaves you with a smile and pleasant feeling.

I was given this ebook to read and asked to give honest review of it when done by Netgalley and Harlequin.
Published July 1st 2013 by Harlequin Romance 256 pages ISBN: 0373742487

Friendship?
Melissa Stone has done a fine job of avoiding her former best friend Cooper Ford. She was devastated when she discovered her husband was cheating on her, and felt doubly betrayed that Cooper had known all along.…

Forgiveness…
But she can’t ignore him forever—especially now that they’re working together on a charity project! And as she and Cooper get closer again, she confides in him her plans to start a family—alone.

Fatherhood!
Cooper wants to be there for her this time—but would he really consider being the father of her baby…?
Posted by rhonda1111 at 3:22 PM