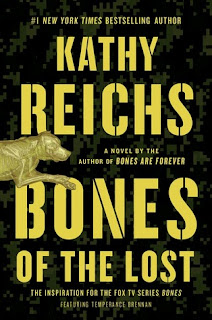 Don't like the cover I like the UK better. I am always surprised how much a cover on a ebook makes me either want to look at book or turn me away from one.
This is the first Temperance Brennan novel that I have read. I admit to being a fan of the T.V. series Bones. Their is a lot different but a lot the same especially the tone of the book. I hope to be able to read more of Kathy Reich's books in the future.

The lead character is Tempe Brennan a forensic anthropologist. She is smart, strong will and determined to find the answers to her case. She travels over to Afghanistan to dig up some remains as evidence on a article 32 hearing. Her daughter is over their serving. I like Tempe Brennan.
The characters are believable and some are likable while others are not.
The book really does not make me care about the characters and their lives. It does about how many people are sold into slavery each year. Especially females. I wish I could do something to help stop it like Dr. Brennan does.
A Teenage's body is found the cause of death is a hit and run accident they think. No one has come forth about who she might be. The police are at a dead end and ask Tempe to look at the bones. She is determined to help find out who she was and who killed her. She even bugs the cop from Afghanistan.
She works a few cases at a time some just take hers a few minutes of looking at ex-rays of bones that are wrapped.

There is some drama that happens to Dr. Brennan over in Afghanistan also someone threatening her in her home.
I liked the book and would read more of them.
I was given this ebook to read and asked in return to give honest review of it by Netgalley.
08/27/2013 PUB Scribner 336 pages ISBN9781439102459


Description below taken off of Goodreads.

#1 New York Times bestselling author Kathy Reichs returns with her sixteenth riveting novel featuring forensic anthropologist Tempe Brennan, whose examination of a young girl killed in a hit and run in North Carolina triggers an investigation into international human trafficking.When Charlotte police discover the body of a teenage girl along a desolate stretch of two-lane highway, Temperance Brennan fears the worst. The girl’s body shows signs of foul play. Inside her purse police find the ID card of a prominent local businessman, John-Henry Story, who died in a horrific flea market fire months earlier. Was the girl an illegal immigrant turning tricks? Was she murdered?

The medical examiner has also asked Tempe to examine a bundle of Peruvian dog mummies confiscated by U.S. Customs. A Desert Storm veteran named Dominick Rockett stands accused of smuggling the objects into the country. Could there be some connection between the trafficking of antiquitiesand the trafficking of humans?

As the case deepens, Tempe must also grapple with personal turmoil. Her daughter Katy, grieving the death of her boyfriend in Afghanistan, impulsively enlists in the Army. Meanwhile, Katy’s father Pete is frustrated by Tempe’s reluctance to finalize their divorce. As pressure mounts from all corners, Tempe soon finds herself at the center of a conspiracy that extends all the way from South America, to Afghanistan, and right to the center of Charlotte. “A genius at building suspense” (Daily News, New York), Kathy Reichs is at her brilliant best in this thrilling novel
Posted by rhonda1111 at 6:31 AM