The Courage To Say Yes by Barbara Wallace 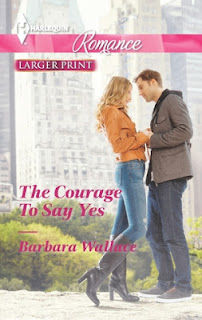 The Courage to Say Yes deals with some tough subjects in a good way I believe. Abby Gray left her boyfriend behind at least she thought she did. It took her a long time to get a plan to escape. I really don't have a clue just how hard it would be to leave. To be in that situation.

Abby is getting stronger and fighting back. She still has a lot of issues dealing with self confidence of having been in abusive relationship. Her mom has and still is in one. Abby got a waitress job. She is living in a shelter.

Hunter Smith does not get involved in things he stands back and takes pictures. He sees Abby his waitress having troubles and interrupts to ask for more coffee. He did not need any. Later when she gets off work he takes a shot of her. He notices the bruise on her wrist. offers help. Abby says she is fine she is handling it.

Abby ex-boyfriend shows up at work again. She gets pushed back. Hunter's 5,000 dollar camera gets damaged. ex gets punched in face. Abby loses her job.

Hunter offers her a temporary job cleaning his apartment getting his photos filed. His last assistant left things in a mess.
Things get close fast between them. Hunter pushes her away but he ends up leaving town right after for his next assignment. While they are apart they video conference almost daily.
Hunter is used to staying apart from everyone, because that was how his father raised him after his mother died.
It does surprise me how easy and free Abby is to talk back to him so fast.

Description below taken off of goodreads.

Can she find the courage to love all over again? Hunter Smith likes to keep out of messy situations; life is just easier if you don't get emotionally involved. He's never been a knight in shining armor before—but when he sees Abby Gray in trouble, he can't stop himself from stepping in…

Trying to put the scars of the past behind her, Abby has decided to make a fresh start. Hunter's offer of making her his new assistant could be a step in just the right direction. But is she ready to believe that happy-ever-afters can happen in real life—not just in fairy tales?
Posted by rhonda1111 at 8:13 AM