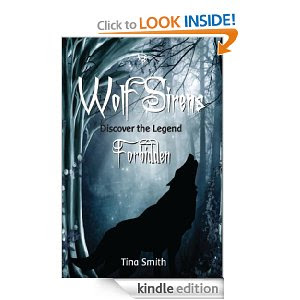 Wolf Sirens Forbidden Media Kit
Publisher: Indie Publication Date: July 2012 Genres: Paranormal/fantasy/romance/suspense
When Lila unwillingly moves to the country town of Shade, she can’t imagine the life-altering events that lie in wait for her. Shade has a curfew and has always been surrounded by myths. A central feature of the town is its famous statue of Artemis, Goddess of the Hunt, whose spirit is said to protect the innocent.
Lila falls in with a group of intriguing teenagers with luminescent eyes and soon she is drawn into the shadowlands of fantasy and reality, where destiny collides.
A mysterious local girl, Cresida, warns her to stay away, but Lila is drawn to them like a moth to a flame. Cresida knows their fatal secret and she is honour-bound to protect those who are endangered. But she underestimates Lila’s passion for the mysterious and charismatic clan of youths. Lila begins to feel a call she cannot ignore. Yet her heart is filled with vulnerable desires that begin to turn the underworld upside down, for both hunter and hunted, as she learns they have been waiting for her…
Inspired by the legend of the mythical femme fatale, Wolf Sirens is an intimate tale of unrequited and forbidden love in the underworld, a masterpiece of romance fantasy.
A compelling debut novel about how love and fate chooses you. Inspired by Grecian demigod Artemis and the mythical femme fatale, Wolf Sirens is sure to enthral all lovers of the fantasy, romance genre.


About the Author:
Tina Smith is an herbalist, dog lover, Piscean and mother with a fondness for strong female protagonist's. A love of the fantasy genre and the deep exploration of dark and evocative subjects inspired Wolf Sirens Forbidden. The sequel Fever further unfolds the tale of the heroine femme fatale, on her journey in the underworld between the lands of myth and reality.
Purchase link:
Amazon
Giveaway
International: a Rafflecopter giveaway

US: a Rafflecopter giveaway

Mostly it is high school typical of every high school, You have your clicks, don't fit in, don't get along with your parents. You have a crush on someone and someone different likes you. All the regular teenage dramas except you learn that some of the teenagers are not teenager or even human. That jealousy can kill you. That the weird girl has a reason for being different. That their is more differences around than just country over city.

Lila's parents got a divorce and her mom has moved back to the town she grew up it. It is cheaper to live in the country than the city. Lila's first few days of school she realizes that she does not fit in. No one even talks to her. Her mom does not care about her.
Then when she meets someone Cresida she tries to tell her about the werewolves. That they want her. Cresida is different. She used to be one of the popular kids. Now she stays off by herself.
The cool kids invite her to join their group that is competing in dance troupe they are short one girl. They start to pressure her to come watch them. They make her feel like she belongs.
One of the cool guys Reid becomes her boyfriend fast. Lila ends up sleeping with him but all she can think of is another boy Sky.
Cresida is still watching her. Warning her away from the group and than telling her it might be better if she does hang with them.


I cared about the characters. I wanted things to workout for Lila. It is funny that Lila's mom was worried more about her when she was doing good then when she was sneaking out drinking and having sex.
As a parent I did not like how fast and easy Lila and Reid got together. Especially when she was thinking about Sky Reid's best friend.
The Mythology of where and how the werewolves came to be really has not made sense to me. Maybe as the next book comes out I will see and understand that part of the story more.
Some of the werewolves are much older than high school age. Werewolves look really young and fit. You can't just tell how old one is by looking at them.
I can't wait to see what happens in the next book. I hate having to wait for the next part of the story.

Wow, thanks for such a great in depth review. I appreciate the fact that you read my novel and liked it. Thanks
Regards Tina Smith

P.s I love the first paragraph!
The bit that says "Except that jealousy can kill you..."
Great stuff.