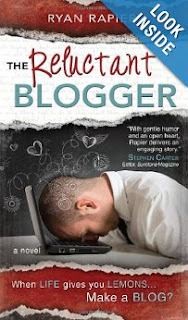 Boy this book draws out the emotions for me. I laughed and cried. Saw myself in a few of the situations and having some of the same feelings. In other characters I saw people who made the same choices. It was real to me. Ryan touched a lot of hard topics in one LDS book.

I am a widow and faced a lot of the same feelings and situations as Todd faced.

Since Todd has troubles opening to his Dr. He is asked to write a blog about what he is feeling and what is going on with his life. It will be just between the two of them.

A lot of the book is set in the Dr. office and writing about what is going on around him and how he handles certain problems.

Todd is a father of three little kids. He is struggling with his feelings and with the people around him.

I don't want to say much about the other problems that happen in the book that he has to learn how to cope. Sometimes I agree with him and others I personally made other choices. I think in a lot of ways Todd made better choices.
It will definitely make you think about different reactions and situations that come up. Have tissue handy.

This ebook was given to me to read and in exchange I was asked to give honest review from NetGalley and Cedar Fort.

Published August 13th 2013 by Bonneville Cedar Fort INC. 432 pages ISBN:1462112544
Description below taken off of Netgalley.
Dr. Schenk, I don’t know if what I’ve written amounts to a breakthrough or not, but I hope you know how difficult this was for me. I also hope this proves how serious I am.

Todd knows he is in a bad place. That’s why he went to a therapist in the first place, and that alone took a lot of doing. So when Dr. Schenk threatens to stop their sessions unless Todd puts in more effort, he grasps at the last available straw: a personal blog that will force Todd to confront his demons.

Ever since he lost his wife, Todd has not been the same. He’s been forced to Single Adult activities at church, and everyone seems to expect him to just forget Marci and get married again—especially when he meets Emily, who makes him smile and starts to bring him out of his depression. But dating again is hard when Todd has three kids of his own, not to mention an overbearing father and friends with their own problems.

This beautifully woven and emotional tale is both heartbreaking and humorous. Championing friendship, love, and family, Ryan Rapier deals adeptly with the everyday struggles we face as well as the strongest ties that keep us together. You’re sure to fall in love with this magnificent tale of redemption, forgiveness, and new beginnings.

Hi,
I’ve read some of the reviews you’ve done on Amazon and enjoyed your blog. I wonder if you would be interested in reading my eBook, "Invasion of Privacy and Other Short Stories.” The main story is about a computer tech who uses his hacking skills to find his wife's killer.

It’s about the length of a novella, the other nine stories are flash fiction.

Here is a link to the free eBook on Amazon: http://amzn.com/B00EBATCTU
Thanks for your time,
Jim Liston