Helga: Out of the Hedgelands Blog Tour Spotlight & Givaway $25 gift card to Amazon or PayPal 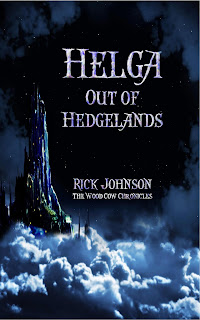 Helga: Out of the Hedgelands


Twelve-year-old Helga has more danger in her life than most beasts her age—Wrackshee slavers after her, a vicious attack by bandits that nearly kills her, a race against dragons pursuing her, and leading a daring rebellion to save her life and rescue friends and family from the insidious WooZan. And that is just the beginning. But what do you expect when you are a young beast who just can’t see the stupid rules of the world making any sense? Helga can’t accept things as they are and ends up taking on not just one, but two all-powerful, supreme tyrants in two different realms.


Helga never intended to lead a revolution. It just sort of happened because she wouldn’t go along with the “rules of normal” that keep tyrants in power and entire societies enslaved. Beginning on a dangerous quest to solve some mysteries in her own past, Helga leads her quirky comrades on a journey that will not only forever change them, but upset ancient civilizations.


As an author, I’m drawn to eccentric, unexpected characters: those who surprise because they hear a distant galaxy, see a different music, create their own fragrance rather than get hooked on a soundtrack; the child who has her own ideas about how the emperor is dressed; the lunatics and rebels who tell stories on the boundaries. Helga’s unusual story will take readers to worlds they never imagined—definitely a whole new ride.


Time and again, the unconventional heroine and her eccentric comrades overcome ominous tyrants and black-hearted slavers, not by battling to the last beast standing, but by being the first beast to think differently.


Helga: Out of Hedgelands is divided into three books which introduce the epic saga of the Wood Cow clan and their role in overturning centuries of slavery and tyranny. This story will continue in additional volumes of the Wood Cow Chronicles now in development. Over the series of current and future volumes, the entire history of the Wood Cow clan, the fall of Maev Astuté, and the coming of Lord Farseeker to the Outer Rings, will be told.


I am a native of the Great Plains, having grown up on a farm in the Platte River Valley of western Nebraska. I love the wild beauty of the Plains and nearby Rocky Mountains--the too hot, too cold, too empty, too full of life extremes. Typically, the awesomely diverse and the awesomely stark are much the same, even as they are different. Although I have lived in Michigan, North Carolina, and British Columbia, the western plains, mountains, and desert are in my heart.


As my day job, for over thirty years I have been a faculty member and administrator in higher education. Teaching broadly in the liberal arts, including creative writing, my professional publications include educational materials, poems, and 28 stories for young readers. During my spare hours, I have also collected and carefully studied the records of former times upon which the Wood Cow Chronicles are based. It is my privilege to bring this astonishing saga to light.


The Wood Cow Chronicles have been researched and written with the irreplaceable assistance of Barbara, my beloved wife of more than thirty-five years, and our children. Indeed, the essential research into the history of the Wood Cows has been conducted during the odd hours of family reading and storytelling "around the campfire" as we say--even when there is no campfire! This research continues and grows richer as our family expands across generations and continents.


Suddenly the kayaks slowed, pausing about twenty yards away—close enough that the Wrackshees’ awful stench covered the area with a suffocating blanket. Using only hand signals to communicate, the slavers silently peered here and there for any sign of their prey. The razor-sharp tips of dozens of small throwing lances, carried on bandoliers slung over the Wrackshees’ shoulders, shone red in the moonlight. Helbara knew that terrible things happened to beasts hit by those poisoned tips—going mad with thirst, eyes bugging, bleeding the color of grass. Each time the gaze of a Wrackshee seemed to fix on the spot where they were concealed, Helbara trembled on the edge of panicked flight. To do so, however, would mean certain capture or death. They were trapped. With every ounce of inner strength, Helbara held her panic in check.

FoRoar-2036 gasped for breath, struggling to climb the steps in the biting cold. Every muscle in his body protested. He was too tired to go on. Every sense told him he was too weak to continue. Yet, still he went on, his breath shooting out in great white clouds. Gasps of moist breath, instantly shock-frozen into icy puffs, marked his progress. He clutched his sacred stone tightly to his chest. The heavy stone made it hard to keep his balance on the ice-covered stairway, worn to a slippery gloss by the constant pad of reed-boots passing over the ice.

“Can’t walk...any...further...AIEEEIYAHHH!...” FoRoar-2036 hesitated in confusion, wondering in his semi-frozen stupor if the fearful scream was his own. Too late, he tried to grasp the cloak of the Hedgie walking in front of him. Clutching vainly after the flapping folds of his friend, he watched helplessly as SaRimm-2036 collapsed from cold and exhaustion, and pitched sideways off into the abyss. FoRoar-2036’s eyes filled with icy tears, but he kept walking. He had no choice. Barely inches separated one stair-climber from another in a line that stretched for miles in both directions. Step, step, step—the stair-climbers endlessly moved up the stairway toward the castle, Maev Astuté, each bearing his or her own sacred stone. To stop in such a line, on such a narrow and treacherous stair, with no guardrail or helper except one’s own courage, could mean that dozens might stumble and pitch off into the abyss. The line could not stop—no matter what.

The key to a successful run of the dragons to the Hedgelands was speed. Once the monitor caravan was loaded and the monitors were fully awake again, the monitor train had to make the passage between Norder Crossings and the Hedgelands before the monitors grew ravenously hungry again. A skilled Dragon Boss knew precisely how to make the run to the Hedgelands with great speed. Mudpot was the best of them all. Stuff the monitors with shark, load while they dozed, then as they began to stir, set a swift—and tasty-smelling—runner at the front of the caravan. For the runners it was a chance to escape the fate of the slave works at Tilk Duraow. As the runner ran for life and freedom, the monitors raced after the scent of their next meal. The faster the runner, the faster the caravan traveled. If the runner was fast and strong enough to endure the grueling race, he or she might stay just ahead of the monitors all the way to the slave works and win freedom. Runners that faltered or stumbled became an impromptu snack for the monitors. A Dragon Boss wanted the fastest, strongest runner possible. A failed runner meant delay and other problems as the lead monitors snacked, and then turned sluggishly sleepy—while the rest grew dangerously restive. The delay could be even longer if replacement runners turned to “shakes and gibbers”—quivering piles of terrorized flesh unable to stand, let alone run. When “shakes and gibbers” struck it could hold up a Dragon Train for days while new runners were brought from Norder Crossings.
Posted by rhonda1111 at 7:45 AM