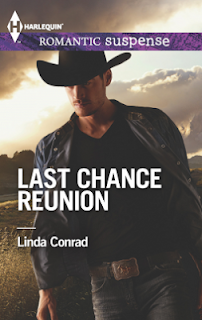 Last Chance Reunion is two different stories that finish off the Chance, Texas series. It is the only one I have read of the series I believe.
The first story is called Texas Cold Case. Colt Chance is back on the family ranch. He was shot on the job and came home to heal. While he is back home he plans on looking into who killed his mom. Chance does not believe that his father killed his mom when he was 10.

The Sheriff of Chance, Texas has never liked Colt. He is also the one who investigated his mom's murder and got the evidence against his father. The Sheriff's step daughter was Colt's best friend growing up. Lacie left town after graduation and never said goodbye to him either.

Lacie is back in Chance she has her own agenda. She is working for her stepfather as a deputy. She hates him. When she runs into Colt and finds out he wants to look into his mother's death she plans to help him.

I wish the story was a little longer. It is full of drama, action and bad guys. There are some love scenes that I skipped over. I did not guess who the murder was.

The second story is Texas Lost and Found

After the Chance's mom was killed and the father arrested their little sister Cami was kidnapped by their aunt. They have been searching for there sister all these years and they are not going to give up till they find her.

Nina Martinez is a Hotshot firefighter from California. They have been sent into Texas to fight a fire. She is separated and goes down into a gulley and sees a ranch house. She sees two people and calls in a helicopter to help get them out and they don't seem to notice the fire that is coming their way. Before Nina can get too close she sees the man hit the women over the head with a shovel. She tells him to stop he hits her again and takes off. Nina checks the woman is dead.

She gets trapped and uses her equipment to cover her and gets by a boulder. Josh is a Dr. with the firefighters before they can get to Nina she calls in a mayday. When he gets out of the chopper he sees a burned body but realizes it is not Nina. He finds her but she is not breathing he gets oxygen on her and flies her to hospital.

Two Sheriffs want to talk to Nina about the body found at the ranch. One of the Sheriffs is Lacie. The woman is actually the wife of one of her deputies. He was away testifying in court so he is not the murderer.

Nina pretends she can't talk and does not remember the killer. She just wants out of Texas. She has bad memories of a child living in Texas.
Josh gets her out of the hospital but they are followed and almost run off the road. They are afraid the killer will be after Nina her picture was on the front page of newspaper.

Josh has wanted to be closer to Nina but she would not let anyone too close to her. He does not know that Nina has had to fight her own attraction to him. They get closer and share more about their early years.

Lacie thought Nina looked familiar and it was after she got back to the ranch she remembered where she saw a picture of Nina it was a age progression of what Cami might look like today.

This story seemed a little rushed too I would have liked a longer story. More love scenes, more drama and more bad cops. I would like to have read the other books in this series sometime.

I was given this ebook to read and asked to give honest review of it by Netgalley.
publication: August 6th 2013 by Harlequin Romantic Suspense 288 pages ISBN: 0373278357

Determined to solve the cold case of his mother's murder, Colt Chance returns home to Texas. Turns out the new deputy sheriff is the woman who broke his heart. But when someone targets Lacie, Colt'll have to decide between the vengeance he seeks and protecting the one he still loves....

After witnessing a murder, firefighter Nina Martinez finds an ally in medic Josh White. On the run, they discover that Nina is the long-missing Chance sister, Cami. Will Cami embrace the love from Josh and her real family before it's too late?