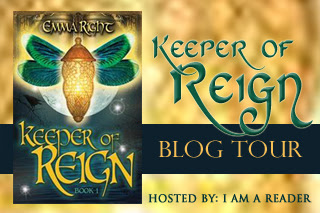 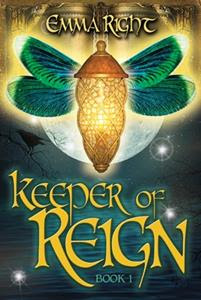 Books written in blood. Most are lost, their Keepers with them. A curse that befell a people. A Kingdom with no King. Life couldn’t get more harrowing for the Elfies, a blend of Elves and Fairies. Or for sixteen-year-old Jules Blaze. Or could it?
For Jules, the heir of a Keeper, no less, suspects his family hides a forgotten secret. It was bad enough that his people, the Elfies of Reign, triggered a curse which reduced the entire inhabitants to a mere inch centuries ago. All because of one Keeper who failed his purpose. Even the King’s Ancient Books, did not help ward off that anathema.
Now, Gehzurolle, the evil lord, and his armies of Scorpents, seem bent on destroying Jules and his family. Why? Gehzurolle’s agents hunt for Jules as he journeys into enemy land to find the truth. Truth that could save him and his family, and possibly even reverse the age-long curse. Provided Jules doesn’t get himself killed first.

Emma Right is a happy wife and homeschool mother of five living in the Pacific West Coast of the USA. Besides running a busy home, and looking after their five pets, which includes two cats, two bunnies and a Long-haired dachshund, she also writes stories for her children. She loves the Lord and His Word deeply, and when she doesn’t have her nose in a book, she is telling her kids to get theirs in one.

Right worked as a copywriter for two major advertising agencies and won several awards, including the prestigious Clio Award for her ads, before she settled down to have children.


My Review: Keeper of Reign by Emma Right

This is a fantasy action book. Lots of drama, action, danger and mystery. It keeps your attention you are not sure who to trust or not to trust. Who died or did not die. It is a clean entertaining book that I want to read the next book in the series.


The plot had lots of twists and turns I did not expect. Lots of interesting characters like giant bugs some good some bad. The races of different people all were cursed at the same time and became really short. With the Elfies the shortest. They live in trees and hide under mushrooms for safety because they are so small.

Jules Blaze is one of the main characters in the book. He is sixteen. His family is one of the Keeper families. Each keeper family as part of the curse has only one child. But Jules has four siblings. He is the oldest.

His Grandparents are missing. Someone came and told them that they died. Jules wants to go search for them. But his little sister follows him so he takes her back home. The next day all 5 children are out playing and they don't make it back home before dark. When they get their they run into their neighbor 16 year old Miranda. Their house is all broken up. Their mom is missing. So is their book.

Their father is away at war he is a General in the army. They are not sure what to do next. They decide to go to a neighbor's house and right after they get close it burns up and they fall down in a gopher tunnel deep underground.

In the next kingdom over they go to see if they can find their family. In that kingdom the ruler Gehzurolle wants all the elfies dead and the keepers and their books brought to him. He wants to end the curse too. armies of Scorpents can smell elfies. They like to torture their captives. But the Elfies have Lanterns that can hide them.

Their are traitors to be found that causes some keepers to be caught. Their are 7 kids trying to find their missing families and they get separated a few times and reunited back and forth. Trying to rescue different members of their families and their books. They meet friends and enemies along the way with interesting creatures like giant butterfly. I liked where the book ended with a little cliffhanger.

I was given this ebook to read and asked to give honest review of it by NetGalley , Telemachus Press (PB). Also asked to be part of its book tour too.
May 18, 2013 PUB Telemachus Press Independent Book Publishers Association (IBPA) Members' Titles ISBN 9781939337696