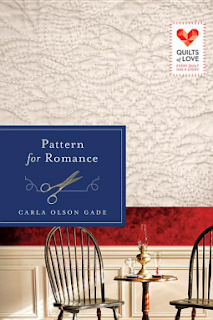 My Review
4 stars
Pattern For Romance was entertaining. It drew my attention right off and kept it going. It showed lots of trials facing the people of Boston, Massachusetts in July, 1769. It is full of Drama that befalls Honour Metcalf. It is a Christian romance, but it fits really well into the story line. It shows some really good characters and their are soso characters and bad characters.
Honour is the main character. She is a hard worker. A year ago she lost all of her family to pirates and their goods except a few and her little sister Tempe. She came from a upper middle class in England. Now she is earning their keep by sewing quilts.
Tempe is 8 years old. She is bright fun little girl. She loves and worries about her sister.
Joshua almost fiancé broke it off and got married to someone else. He saw Honour out in the Hail storm on the ground and brought her into the church for safety.
Reverend Cooper was able to help Honour and Joshua at different times and be a witness for them. He also cancelled and gave encouragement.
Mrs. Wadsworth had her own shop and gave Honour and Tempe job and home when they first landed in Boston with nothing.
She took care of them when they needed her. Gave them love and respect.
Honour kept having one thing after another that kept her from working. It all started with getting a concussion from the hail storm. Then she fell down the stairs because she was dizzy and got a worse concussion and more. While Honour kept having troubles their were good friends and even strangers who took her in and helped nurse her better. They also made Tempe feel at home and helped take care of her when Honour could not.
Their were also people who were willing to accuse her of stealing when she did not want to pay for her own belongings. They wanted to profit from her belongings. Even try and destroy her reputation so she could not get her possessions back.
There at that time a boycott of England goods because of high taxes. Some were for England and others for the colonies. It was a period of unrest.
I enjoyed reading a Pattern for Romance and look forward to reading more from that series. Also would like to read more books by Carla Olson Glade in the future.
I was given this ebook to read and asked in exchange to give honest review of it by NetGalley and Abingdon Press.
08/20/2013 PUB Abingdon Press Abingdon Fiction 240 pages ISBN 9781426752711
Description below taken off of Goodreads.

Honour Metcalf s quilting needlework is admired by a wealthy customer of the Boston Mantua-maker for whom she works. In need of increasing her earnings, she agrees to create an elaborate white work bridal quilt for the dowager s niece. A beautiful design emerges as she carefully stitches the intricate patterns and she begins to dream of fashioning a wedding quilt of her own. When Honour is falsely accused of thievery and finds herself in a perilous position, merchant tailor Joshua Sutton comes to her aid. As he risks his relationships, reputation, and livelihood to prove her innocence, the two discover a grander plan a design for love
Posted by rhonda1111 at 7:08 PM