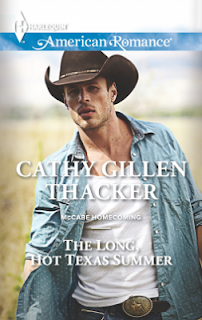 When they say hot it is not the outside temperatures they are talking about only. There are a lot of love scenes that I skipped over. I really like the characters. Most of them have been hurt and are protecting themselves from further hurting. Slowly they start trusting each other.

Justin McCabe has the idea that he wants to start a boys ranch for troubled teens. He wants a safe place so they can get their act together with people caring about them. He uses his own money but that is not enough, so he is applying for grants, setting up a board, getting all the permits ect. Justin wants to run the ranch too. but his board does not think he can connect to the troubled teens, because he has always been a good boy from a good home.

Amanda Johnson is a gorgeous tall blond carpenter. She surprises Justin when she shows up at the ranch in her truck and trailer to work. She is not what he expects. Amanda thinks the boys ranch is a good idea. She was a troubled child with so much anger until she was taken away from her parents different homes and given to her grandparents to raise. Her grandparents had rules taught her to cook and carpenter skills that she learned besides them.

Before the Ranch is ready to open his brother Colt McCabe the deputy sheriff and the case worker Mitzy Martin for the ranch bring out a teen Lamar Atkins who is in a lot of trouble. He needs to work off a lot of community service hours. He is good in the foster family he has but keeps skipping school. His foster parents both work during the day.

Lamar hates school and takes off instead of going to summer school to make up for all the school he failed because he did not go to school during the year. When Justin tries to get him to help with paperwork on computer he messes up a lot and asked him if he could help Amanda by carrying all the wood ect. Lamar is good at helping and learning with Amanda.

I like the plot but it did not need all the love scenes. I thought it was a interesting story. I really got mad at the board for the boys ranch at some of their decisions at first. There were a few scenes that I thought were really funny especially with the dogs.

I will read more of Cathy Gillen Thacker books in the future. I was given this ebook and asked to give honest review of it by Netgalley.

Heating Up In Texas!
When Justin McCabe hires a master carpenter to help build his ranch for troubled teens, tall, gorgeous blonde Amanda Johnson isn't quite what he'd imagined. But not only can she do the job, she has a thing or two to teach him about judging by appearances. And, more important, she has a knack for reaching the kind of kid Justin wants to help.

Amanda hadn't counted on her new boss-all strapping six foot five of him-being so utterly irresistible. Working side by side under the scorching Texas sun, the two of them make a great team-in every way possible. The heat of summer is no match for the sizzle they generate whenever they're together. But when a crisis forces Amanda to face her past, she'll need to make a heart-wrenching decision about her future...whether Justin is in it or not.