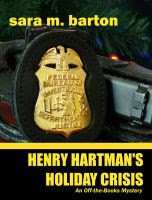 I have had this book for awhile on my kindle and I kept putting it off because I did not want to read about a liar. I should have just read it sooner. It was good.
The one reason he lies is because he is working undercover. He is always trying to out think the bad guys. They are everywhere. Plus he does not want to worry his family over his job.

Sydney has helped agent Henry Hartman with his cases for years now. She can play different parts very well. Henry also helped her with her ex-husband who was hiding assets from her. Sydney is basically alone now. She has enjoyed going to family events with Henry.

Henry's family is good at lying too. He has been raised by four older women after his mom was killed. Hope, Faith, Prudence and Charity.

The setting was a hotel in the middle of snow storm at Christmas.

This is a clean read. Lots of Drama unfolding, little action (especially compared to other mysteries that Sara has written. Lots of dialogs as the two talk about the past and what is happening now.

I am going to put the next book about Henry Hartman on my kindle so I can read it soon.

Description below taken off of Smashwords.

FBI Agent Henry Hartman is a big, fat liar -- a master of deception, who weaves wild tales and creates illusions to fool the bad guys. No one knows this better than Sydney Stansfield, the poor woman he roped into working on highly classified "off-the-books" operations when she was at her most vulnerable. Dumped by the ex-husband she put through dental school, Syd vows to never get married again. That's a challenge Henry can't leave alone. Raised by a family of women, Henry is a sentimental rogue, even more so at the holidays. But he's not about to leave his job as an FBI agent behind, even if it means fooling the Hartman ladies. Taking Syd along for the wild ride, they're in serious trouble when the Christmas celebration collides head on with a killer determined to take out his target. The federal agent crosses the wrong guy and ends up being used for batting practice -- it's up to Syd to get the injured man to Bethlehem, New Hampshire in time for the family reunion. Henry and Syd struggle to keep the ladies out of the loop while getting the job done, but those secrets just keep popping up at the most inconvenient times. Roped into a Christmas wedding at the Inverness Lodge by the willful women, Syd can't figure out if Henry really intends to marry her or if he's just trying to fool his dying grandmother. Will Henry ever tell the truth?
Posted by rhonda1111 at 2:34 PM

I'm having the same trouble with a book I have that's about vengeance. I hate vengeance stories but I've heard such good things about this book. One of these days ...