Dolled Up to Die (The Cate Kincaid Files, #2) by Lorena McCourtney 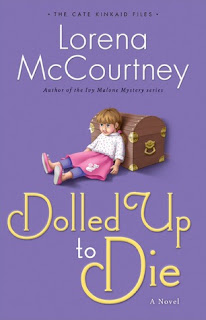 I liked Dolled Up to Die. I did not read #1 of the Cate Kincaid files but I would like to go back and read it. Dolled Up to die stands alone but does talk a little about the first case.

This is a Christian novel, but it mentions prayer and other things as part of the characters in the story. It fits in really good. It is also a clean read. I was kept guessing as who the murder really well until it was unveiled in the story line.

I like Cate. Her character is determined to find out what is really happening. She cares about people she just met. Not out for all she can get from someone. Cate because she cared in first book is getting a new house built for her and her cat. In fact it is mainly because of the cat and she helped save it.

Mitch is dating Cate. He is willing to help her in her P.I. cases with information and backup. He would rather her come work for him than risk her life.

Cate gets a phone call about three murder victims the lady found out at house. Cate asks if she has called the police and that they did not take on murder cases. Cate finally agrees to meet the woman at her house. She is surprised that she has beaten the cops their until she realizes that the victims that were shot were dolls. Then they find the dead body with the cops their too.

Dolled Up to Die is easy story to follow. I laughed in some scenes. Kept trying to figure who did what in other scenes. I would read Lorena McCourtney other books in the future.

I won this book on Goodreads. All thoughts about the book are mine.

When Cate Kinkaid receives a frantic call about a triple homicide, she drives to the scene against her better judgement-aren’t triple homicides more up the police department’s alley?-only to find that the victims are not quite who she expects. Now she has a new rule to add to those she’s learned in her short stint as an assistant private investigator: always find out if the victims actually have human DNA. Because these three do not.
But who would shoot this nice lady’s dolls? What possible reason could the shooter have? And then there’s the startling discovery of another victim, who definitely does have human DNA . . .
With tension that is matched only by humor, Dolled Up to Die is the exciting second book in Lorena McCourtney’s The Cate Kinkaid Files. Mystery fans won’t find a place to stop and take a breath in this fast-paced and intriguing tale
Posted by rhonda1111 at 9:37 PM