The Cowboy She Couldn't Forget by Patricia Thayer 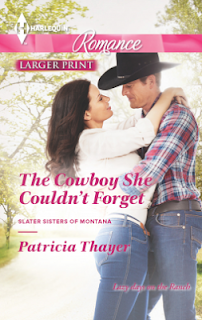 I enjoyed The Cowboy She Couldn't Forget. It is a clean romance, no detailed sex scenes. Divorce sure messes up everyone.
Ana Slater's father has had a stroke. She is needed to help run the ranch with Vance. When her mother left the family when she was young her father turned away from his daughters too.

Both Ana and Vance's mothers left them with their fathers and disappeared from their lives. (I can understand leaving for a day when kids drive you crazy) Their father's were not much better.

Ana is the oldest of four daughters. Their father turned away from them after their mother left. He let them help on the ranch only so much. He did have housekeeper who took care of them. They wanted to help out more be closer to their father but finally turning away from him and the ranch. Now it's Ana's turn to help all she wants on the ranch while her father is getting the help he needs.

The ranch is in trouble. Their federal lease is due and their is not enough money to pay it. They have six months to pay or they lose it.

Vance Rivers at fourteen finally had enough of his dad. His mother left him and his father would rather drink his paycheck. Vance was abused, did not have clothes that fit. Lots of times school lunch was all he had to eat. Vance decided to leave he climbed in a pickup and hid in back. He ended up at the ranch.

Colt gave him a room in the barn. He ate with the family and became close to him. He worked hard but it was a place to belong. He got three meals and a paycheck. Colt always liked Ana, his feelings never went away. Now maybe he could make a move.

Their are a lot of problems at the ranch. They are hurting like a lot of the country. Ana and Vance are working hard to save the ranch. I still have a lot of questions I want answered. I bet their will be more books Ana's sisters coming home and dealing with their dad. I hope we find out more about their mother and why she left. Where did she go?

I could imagine riding a horse and enjoying the magical meadow and fishing along the river. This book felt real. The scenes were believable and so were the answers and solutions could be real for so many people.

One stolen kiss with a cowboy
When Ana Slater's father is taken ill, she knows she can't look after The Lazy S Ranch alone. There is one man who can help. The cowboy she has found it impossible to forget—Vance Rivers.

With the words "Work hard and hands off my daughters!" etched into his memory, Vance knew from the very beginning that Ana was strictly off-limits—no matter what! All he could do was ensure he was the best cowboy in Montana.

But now, with Ana back on the ranch, the rules are set to change. And finally their chance at happiness might be just around the corner….