Against the Mark (Raines of Wind Canyon #9) by Kat Martin 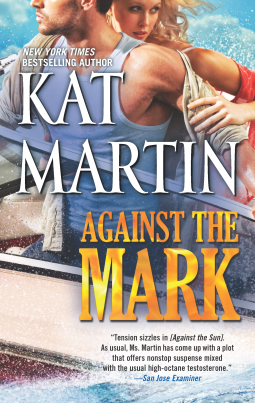 My Review: Against the Mark

This is a nail bitter. Every time you think they are safe something else comes up that puts them back in danger. Lots of drama, action, suspenseful, good characters, humor and too many details of love scenes.

Haley Warren has not seen her father for years. He left her mother for a different woman. Now Betty Jean Warren the other woman called her up and said her father was murdered. Haley leaves Chicago and is staying with her Aunt Ellie. Her Aunt introduced her to Tyler Brodie a P.I.

Tyler will look into her father's death and discover if it was murder or a accident like the police think it was. Tyler is good friends with Ellie. In fact the office is in her guest house on her estate. His partner and wife live on the upper floors of guest house.

Haley wants to help search for answers to her fathers life and death. She finds her father for past 5 years has been living a whole different life. That the truth her mother told her was not the whole truth.

They find a whole lots of questions when they were searching for answers. Also his two computers one was missing a hard drive and other had a virus on it. His house had been broken into after his death. That a lot of things had to go wrong for the boat to explode.

Their was a big case he started to investigate three years ago of two Art pieces were stolen from a museum that were worth millions still on the black market. He had found new information the week before he died.
Then Betty Jean was attacked and put in the hospital and warned to stop looking into her husband's death and if she did not convince Hayley to stop she will be next on their list.

The two cops who are investigating the death are taking the easy out. They don't believe it was murder and Betty Jean was just a home invasion gone wrong.

Hayley has not had good luck with men in her past. She even has been wondering if she is gay, but she is really attracted to Brodie. Brodie has lots of different girls calling him up but he does not answer his phone.

It keeps your attention the whole book and you want everything to work out Tyler and Hayley.
I was given this ebook to read and asked in exchange to give honest review of it by Netgalley and Harlequin.
08/27/2013 Pub Harlequin Imprint Harlequin MIRA 400 pages ISBN 9780778314677


Description below taken off of NetGalley

The perfect murder is a work of art

In one catastrophic instant, Haley Warren's estranged father was taken from her. She never got the chance to reconnect with him, so now she's doing it the only way she's got left: by proving the explosion that killed him was no accident.

When Tyler Brodie, the provocative and handsome P.I. hired by Haley, discovers that her father was investigating a suspected art theft, he knows his death is no coincidence. After all, tens of millions of dollars worth of stolen art could motivate a thief to go to any lengths—including getting rid of anyone poking around where they don't belong.

As Haley and Ty get closer to the truth, the truth gets ugly: Did Haley's dad know too much…or was he in on the take? And although Ty's a consummate professional, he's having trouble focusing on the facts of the case, and not the figure of his gorgeous client. The two are determined to get to the bottom of the case, even if it means they die trying.
Posted by rhonda1111 at 7:51 AM