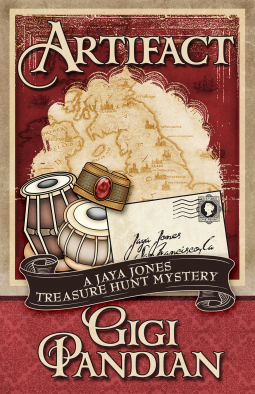 4 STARS
I like Jaya Jones. She just jumps in when she thinks she can help her ex-boyfriend. She is small, smart and knows how to fight back. She is a interesting character that I would love to read more books featuring her. Their is a mystery to solve and Jaya only knows a little of it. Instead of calling the police when she thinks her ex-boyfriend was murdered. She decides to go find what he has been up too and plans to find his murder. Plenty of suspects, treasure hunt, murder and lots of history make a good story. I was kept guessing, not sure who to trust. The plot had some nice twists in it. Some I guessed but some a total surprise. Lots of mystery, action and drama to keep you reading to find out what would happen next. It is also a clean read.

Jaya Jones has got her doctorate and is working on getting tenure she plans to write a paper this summer. She is part Indian and part American. She plays the Tabla two evenings a week. She knows self defense. She is short so always wears high heels. She acts tough but really trusts and believes in people.

When she is sent a package the same day she learns that her old boyfriend in England had died the day he mailed it to her. She thinks he was murder in Scotland. The artifact was a gold bracelet with a giant ruby in it. Had dirt in it still. The note was brief he did not trust anyone else for her to keep it safe. Gave her his cell number. Jaya wants to find out about the bracelet and wants to find out who murdered Rupert right after he mailed it to her. She takes a picture of the bracelet and sets off to find information about it.

She is sent to graduate student Lane. Lane says it not real. He thinks someone photo shopped it. Jaya takes out the bracelet from her purse to show him its real. Lane tells her he will do some more research on it. He has a look on his face when he first sees it. Takes it right to bank and gets a safety deposit box. When she gets back to her apartment finds out she was robbed and only her jewelry case is broken nothing missing.

Jaya decides to head to Scotland to find out what is going on. Lane plans to go and research the bracelet and protect her. Someone is following them in London so they follow the leads to Scotland and come up with a cover story.

I was given this ebook to read and asked to give honest review of it when finished by NetGalley and Henery Press.
08/06/2013 PUB Henery Press 296 pages


Description below taken off of NetGalley.

“If Indiana Jones had a sister, it would definitely be historian Jaya Jones.” — Suspense Magazine

When historian Jaya Jones receives a mysterious package containing a jewel-encrusted artifact from India, she discovers the secrets of a lost Indian treasure may be hidden in a Scottish legend from the days of the British Raj. But she’s not the only one on the trail.

From San Francisco to the Highlands of Scotland, Jaya must evade a shadowy stalker as she follows hints from the hastily scrawled note to a remote archaeological dig. Helping her decipher the cryptic clues are her magician best friend, a devastatingly handsome art historian with something to hide, and a charming archaeologist running for his life. When a member of the dig's crew is murdered, Jaya must figure out which of the scholars vying for her affections might be the love of her life—and which one is a killer.