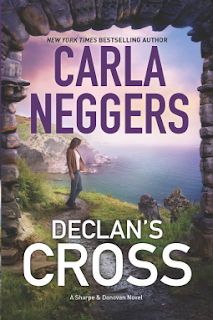 This is I believe the third book in the sharpe and Donovan series. I have enjoyed reading all 3 of them. Wish my memory was like it used to be. The story bounces from Ireland to U.S and back & forth. It covers art theft now and ten years ago, missing person/murder? Lots of secrets.
Their are four Donovan brother's from small town in Maine. Colin works for the FBI deep undercover but he tells everyone he works in office. Colin right now went to Ireland to unwind after his last mission. His girl friend Emma Sharpe followed him over.

Emma has interesting background. She grew up in Maine about 10 minutes from the Donovan' hometown but they did not meet till the first book Saints Gate. She was almost a nun. She left that and came over to Ireland and worked with her family's business in art recovery. Emma than joined the FBI and works in art crime.
Julianne Maroney is from the same hometown as the Donovans. She is trying to get over falling for Andy Donovan. So when she met Lindsey and had the chance to come over to Declan's Cross. She jumped at it. It was a fast decision.
Andy emails Colin that Julianne is headed for Declan's Cross and wants to make sure all is okay with her.
Julianne was supposed to be met at airport by Lindsey and wasn't. So she decides to rent a car and make her way to Declan's Cross. She is not too happy to be met there by Colin and Emma. But later she is glad that they are their.
I admit to being lost a few times in this story. With a art theft ten years in the past, With Emma's family working the case still. To Lindsey being missed. I was never right in my guesses where the story was going. Lots of drama, secrets people are keeping. A few love scenes.
I liked it. But I enjoyed the first two of the series better.
I was given this ebook to read and asked to give honest review of it by Netgalley.
08/27/2013 PUB Harlequin Imprint Harlequin MIRA 320 pages ISBN:9780778314639
Description below taken off of Netgalley.

An escape to an idyllic Irish seaside village is about to turn deadly in this riveting new novel by master of romantic suspense Carla Neggers
For marine biologist Julianne Maroney, two weeks in tiny Declan's Cross on the south Irish coast is a chance to heal her broken heart. She doesn't expect to attract the attention of FBI agents Emma Sharpe and Colin Donovan—especially since a Donovan is the reason for her broken heart.
Emma and Colin are in Ireland for their own personal retreat. Colin knows he's a reminder of everything Julianne wants to escape, but something about her trip raises his suspicion. Emma, an art crimes expert, is also on edge. Of all the Irish villages Julianne could choose…why Declan's Cross?
Ten years ago, a thief slipped into a mansion in Declan's Cross. Emma's grandfather, a renowned art detective, investigated, but the art stolen that night has never been recovered and the elusive thief never caught.
From the moment Julianne sets foot on Irish soil, everything goes wrong. The well-connected American diver who invited her to Ireland has disappeared. And now Emma and Colin are in Declan's Cross asking questions.
As a dark conspiracy unfolds amid the breathtaking scenery of Declan's Cross, the race is on to stop a ruthless killer…and the stakes have never been more personal for Emma and Colin