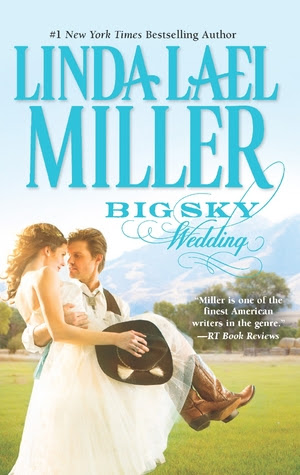 Big Sky Wedding is finally Brylee's story. Brylee has not been to happy since she was left at the alter by Hutch. He ended up marrying someone else. Brylee threw herself into her business and made it a success. She lives in her own apartment on the ranch that she and her brother own.

Newcomer to the area is Zane Sutton. Zane was a rodeo champion turned actor and decided to come to Montana and live on the ranch his brother Landry and him had bought years ago. Zane leaves a note and a big check to his housekeeper back in LA. Zane's house needs work badly he is sleeping on a air mattress.

Landry calls him up and tells him his father dropped off their half brother 12 year old Nash. They really don't know him. His mother is out of the picture. Landry is supposed to go on a business trip overseas tomorrow. So he is putting him on a plane and Zane better meet the plane.

Nash does not have much and his life had not been to stable. At least when he and Landry were kids and his dad took off they had their mom's love. Things were tough but they were together. They went shopping and bought some groceries and beds. Then before they get to comfortable Zane gets another call on his cell from Cleo. She is mad that Zane just took off and left her. She was too old to look for a different employer. She orders him too buy her a first class ticket in two days.

Zane had met Brylee on his property and liked her a lot first of all. When she saw his dog the next day and read his collar she came over to give him a lecture. Slim was starving and she could not believe he was not taking better care of his dog. Zane had just got the stray from the pound before moving here. He had not time enough yet to make a difference.

Zane's idea of a simpler life has not going as planned. He now had his brother living with him, dog, housekeeper and his ranch was torn up getting it fixed like Cleo wants. Even Landry shows up to see what the ranch they had bought and split looks like.

Brylee is coming out more and more socially now and just not working. She is also scared to trust a guy now.

I like that now that Zane realizes that Nash needs someone at first was not happy but steps up to the plate and takes care of Nash and when he promises something he will keep his word. He remembers his childhood and how his father would come and go. He plans to make Nash a part of his family give him stuff he needs and wants.

This romance novel is all about relationships between different people and what they want in the future. Their is a couple of love scenes towards the end of the book that I skipped over. It kept my attention and I read it in one setting. Did not want to put it down. I do want to know Landry's story and hope the next book is his.

The "First Lady of the West," #1 New York Times bestselling author Linda Lael Miller, cordially invites you to Parable, Montana-where love awaits. Wedding bells are ringing in Parable, Montana, but Brylee Parrish hasn't enjoyed the sound since being jilted at the altar by Hutch Carmody. She's over Hutch now, and running a multimillion-dollar business is challenging enough for this country gal. So she should avoid falling head-over-boot-heels for A-list actor Zane Sutton. He's come home to his rodeo roots, but Hollywood lured him away once and just might again. Yet everything about him, from his easy charm to his concern for his young half brother, seems too genuine to resist....

Zane didn't come to Parable for love-but count on a spirited woman to change a jaded cowboy's mind. Problem is, Brylee's not convinced he's here to stay. Good thing he's determined to prove to her, kiss by kiss, that she's meant to be his bride.
Posted by rhonda1111 at 8:00 AM