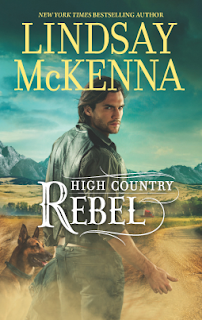 My Review
4 STARS
This is the third book lately that has bear attack in it. Makes me want to stay out of the mountains. High Country Rebel starts off getting your attention and keeps it with drama, action, interesting characters, romance and too many sex scenes and good, loyal, trained dog.

Talon was a Navy Seal with PDST. He was taken hostage, and rescued with the help of his dog. He was medically discharged. Because of his PDST he has walked from California to Wyoming to his home. He is almost close to Jackson Hole when a late winter storm has come. Talon has been sending most of his pay home to his mom who is fighting breast cancer.
Talon knows he is in trouble. He is sick, freezing in blizzard. Zeke his dog had saved his life many times over seas. He is well trained he is worried about what would happen to Zeke.

Cat is a paramedic and a fire fighter. She is on her way to her part time job as a wrangler when she sees Talon. She stops the car. Talon gives signal word Allow to Zeke so he knows that she is helping Talon not a threat. Cat takes him to the Bar H the closes place. Their is no way to get him to the hospital for help.

Cat starts him on iv liquid and gives him antibiotic that she keeps in her first aid bag in car. Cat has her own problems dealing with her abusive childhood to her recent ex-boyfriend who tried to hit her and now is stalking her.

Gus who owns the Bar H is a kind special lady. Her granddaughter Val came home to help her run the ranch and ended up marrying Griff. Even as Talon is fighting fever she tells him that he has a job and a place on the ranch. She watched Talon work with his father at the neighbor ranch before he joined the Navy.

Talon's mom has almost given up fighting against her cancer. This is her second round with the cancer. It is good for her that Talon is back home.

Their are a lot of good people that are willing to help others when they can. Lots of people have helped Talon's mom while he served over seas.

Their is a lot of drama, Zeke is a awesome dog and saves lives overseas and here in Wyoming.
I was given this ebook to read and asked to give a honest review in exchange by Netgalley.
publication: August 27th 2013 by Harlequin HQN 384 pages ISBN9780373778515

"Talented Lindsay McKenna delivers excitement and romance in equal measure." —RT Book Reviews
Battle-weary former Navy SEAL Talon Holt’s top priority is to defend his own. With a military dog to care for and his traumatized soul to mend, he hitchhikes from California to Jackson Hole, Wyoming, hoping for a fresh start and to be with his ailing mother. But he can’t outrun the ghosts of war—especially when a ferocious storm forces Talon to accept the help of paramedic Cat Edwin. The gorgeous rescuer wants to heal his wounds inside and out, but the fear in her arresting blue eyes calls to his instinct to protect.

Trust just doesn’t come easy to Cat, who, thanks to a troubled past and a violent ex, tries to keep Talon at arm’s length. Yet attraction draws them together despite the very real danger each of them brings to the other. Now Talon is driven to save Cat, even when it leads to a high-country showdown that could cost them love…and their lives.
Posted by rhonda1111 at 5:41 AM