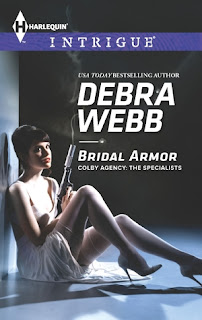 I liked it but felt like the ending was rushed. I think it needed to be longer or something. It had a lot of different familar characters and some I had not read about. Lots of drama, action. romance and snow. Their is also a bomber on the loose and a Russian
attack helicopter in Colorado.

For most of the book you are not totally sure who to trust. Who is setting up who? In fact I still am wondering parts of it.
Thomas Casey niece is getting married. He is giving the bride away. Most of the guests are working for CIA, Specialists or for the Colby Agency. So security is tight and everything should be okay for the wedding. They have rented out the whole hotel for it.

When Thomas lands in Denver just beating a big snow storm that no one saw coming. He is met by Johara di Rossi a agent he worked with and got close years ago. She asks him to come with her. When they get to the car Thomas had rented it blew up. His quick reaction saved them.

They got in Jo's car and away they thought from the enemy. Every time you think they were safe something else happened. Jo saw one agent follow her and thought he might be responsible for it. Thomas trusts that agent that she saw at the airport.

Grant assignment was to follow Jo around and see what she is up too and report to the assistant director who was in charge while Thomas was on vacation. He thought it would be easy since she has been on a desk for the past 4 years. He lost her. He did find out that the car that was bombed was his director. Now he was missing too.

Everyone is worried when Thomas does not show up on time first because of snow. Then all calls go direct to voice mail. He has missed checks in. That is not normal.

Their are a few love scenes that I skipped over. If you have read most of the Colby Agency: Specialists than you would be glad to see all the characters from previous books. I have read some and know some of the back stories but their are a lot of them that I have missed.

I was given this ebook to read and asked to give honest review of it by Netgalley and Harlequin.
publication: August 20th 2013 by Harlequin Intrigue 224 pages ISBN:0373697104

Two agents' forgotten love is rekindled in USA TODAY bestselling author Debra Webb's Colby Agency: The Specialists series. Someone was out to get Thomas Casey. His profession had taught him to trust no one. So when Johara di Rossi abducted him on his way to his beloved niece's wedding, Thomas assumed the worst—despite their intimate history.

Though attachments made him vulnerable, Thomas was haunted by regret for walking away from Jo years ago. No other woman had stirred such intense desire in him. Now, snowbound in an isolated cabin, with a determined enemy from his past closing in, suspicion begins to melt away as the embers of their passion reignite.
Posted by rhonda1111 at 10:53 AM