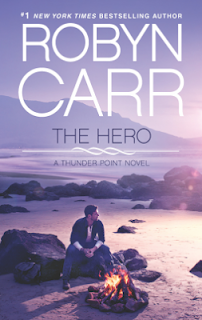 I have enjoyed getting to know Thunder Point and was excited to read this third novel Hero. It's is a small town close to the beach in Oregon. This one brings new characters into town, changes some characters, old familiar characters we get to see how their life is going. Some action, lots of drama, new friends forming, new family ties getting stronger. Some romance and a couple of love scenes that I skipped over. Mostly it tells about life.

Devon McAllister is walking down the road early one morning wearing a backpack and carrying her daughter 3 year old Mercy. When Rawley Goode picks her up. Rawley recognizes her style of dress and hair as belonging to a commune away off he offers her a ride and breakfast at the bar he is on his way to open. Rawley has had some bad times in the past. He wants to help her get on her feet.

Devon decides to trust Rawley for Mercy's sake. She lets him take her home but first to walmart buys some clothes for Her and Mercy. While she is picking out a couple of pants for both of them she sees Rawley has bought groceries and more important a car seat for her daughter safety.

Rawley is in his 70's and has no family left. He lives in a house and does things for the bar. He does not talk a lot. He served three tours in Vietnam. He has been homeless and starts to open his home and heart to Devon and Mercy.

Cooper and Sarah decide on a date for their wedding. Sarah is leaving the coast guard. They arrange musical houses and plan to build a new home close to the bar.

Spencer is living in Cooper's RV but is looking for a better place for him and Austin. He is the new football coach and is trying to get past loosing his wife, and parents in the same year. Austin now has two dad. Cooper and Spencer are working together to build good friendships between them. He is lonely.

Devon gets a job working for the new clinic in town. She is pretending that Rawley is a distant cousin and when things did not work out he offered her a place to stay. When really she escaped the commune with the help of one of the other woman's help. She had to stay because she could not leave without her daughter. The commune was getting dangerous.

I read this book the day I received it and look forward to reading more books by Robyn Carr in the future. She makes communities that anyone would love to live in where they care about each other and want to help. That you can't help to want to come see what they are doing next in their town.

Description below taken off of NetGalley

With warmth and sensitivity, #1 New York Times bestselling author Robyn Carr shows readers that falling in love can be the bravest act of all.

In a moment of desperation, Devon McAllister takes her daughter and flees a place where they should have been safe and secure. She has no idea what is around the next bend, but she is pretty certain it can't be worse than what they've left behind. Her plan is to escape to somewhere she can be invisible. Instead, an unexpected offer of assistance leads her to Thunder Point, a tiny Oregon town with a willingness to help someone in need.

As the widowed father of a vulnerable young boy, Spencer Lawson knows something about needing friendship. But he's not looking for anything else. Instead, he's thrown his energy into his new role as Thunder Point's high school football coach. Tough and demanding to his team, off the field he's gentle and kind…just the kind of man who could heal Devon's wounded heart.

Devon thought she wanted to hide from the world. But in Thunder Point, you find bravery where you least expect it…and sometimes, you find a hero.
Posted by rhonda1111 at 7:42 AM

I really enjoy this new series!