The Courting Campaign by Regina Scott 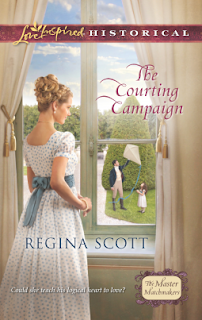 The Courting Campaign touched me in different ways. Reminds me how many simple things we take for granted that people did not have a 100 years ago. Their are lot of coal miners in this area and yes it's still dangerous but so much safer than before. Orphans are easy prey still in the world but they should not be. That fathers spending time with their children can make a big difference in there lives.

Emma is now a Nanny in the Rotherford house for three months. Sir Nicholas has not met with her yet. Emma is smart and is an orphan who lived with a another scientist as her foster father but really were more like slaves in his household. He wanted to marry her off and she decided to find a different job instead.

Emma loved Alice and was glad to be a nanny to her. She has a doll who is her companion at all times. Alice mother died awhile ago and her Aunt lives with them to run the household.

When their is black smoke in the lab the cook asks Emma to go check on Sir Nicholas. Emma was planning to find him passed out on the floor but he was just going on with his work. She made him go outside to get fresh air. When Sir Nicholas asked her, " She was?" She told him." Your daughter nanny for the past 3 months and he should know that."

Emma decided she need to launch a Courting Campaign to throw Nick and his daughter together more often. She planned to get him out of the lab more often so he could get to know his little girl more. A few others in the household agreed with her.

I have to admit to chuckling with the cooks plan to get him to spend time with his daughter. She did not use spices in his food and his favorite breakfast item she sent them all up to nursery. So he would have to eat with his daughter if he wanted any of it.

Nicholas wanted to make the mines safer for the miners so he was trying to make lanterns that did not catch fire with the gases in the mines yet give them the light they needed.

Interesting characters some you really liked and some you were meant to hate. Their is some good tension between the characters too. Alice is charming. Drama was good plus suspense was mild. Easy to read in short amount of time. It is also a clean read.

I was given this ebook to read and asked to give honest review of it when finished by Netgalley.
publication: August 6th 2013 by Harlequin Love Inspired Historical 288 pages ISBN 9780373829767

The Nobleman and the Nanny Emma Pyrmont has no designs on handsome Sir Nicholas Rotherford—at least not for herself. As his daughter's nanny, she sees how lonely little Alice has been. With the cook's help, Emma shows the workaholic scientist just what Alice needs. But making Nicholas a better father makes Emma wish her painful past didn't mar her own marriage chances.

Ever since scandal destroyed his career, Nicholas has devoted himself to his new invention. Now his daughter's sweet, quick-witted nanny is proving an unexpected distraction. All evidence suggests that happiness is within reach—if only a man of logic can trust in the deductions of his own heart
Posted by rhonda1111 at 3:24 PM