Against the Ropes (An Unbridled Adventure) by Cindy McDonald 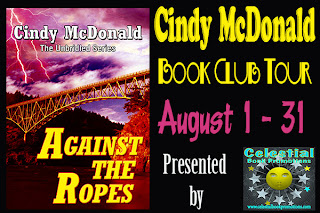 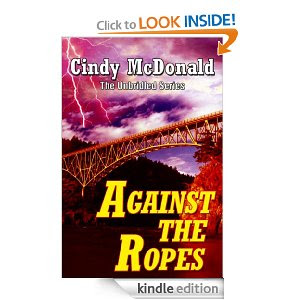 When the West’s good-hearted farm manager, Punch McMinn, stumbles upon Eugene Strom, a down-on-his-luck fighter threatening to jump from an old bridge, Punch takes him under his wing and convinces the patriarch of Westwood Thoroughbred Farm, Eric West, to give him a job.

But when the gun-toting mob shows up at Westwood, it’s quite obvious that good ol’ Eugene is hiding a secret—a big one. Punch finds himself questioning his good intentions when the ex-fighter puts the people he loves against the ropes—and at the edge of disaster.

Against the Ropes is the fourth and latest installment in author Cindy McDonald’s Unbridled Series, which chronicles the lives and turmoils of the West family, who successfully run Thoroughbred horse training business.

For twenty-six years Cindy Mcdonald’s life whirled around a song and a dance: She was a professional dancer/choreographer for most of her adult life and never gave much thought to a writing career until 2005.Suddenly, she felt drawn to her computer to write about things she have experienced (greatly exaggerated upon of course) with her husband’s Thoroughbreds and the happenings at the racetrack.

Why didn’t Cindy write about my experiences with dance? You might ask. “Eh, believe it or not life at the racetrack is more…racy.” Cindy says. “The drama is outrageous—not that dancers don’t know how to create drama, believe me, they do but race trackers just seem to get more down and dirty with it which makes great story telling—great fiction.”

Cindy didn’t start out writing books, The Unbridled Series started out as a TV drama, and the Hollywood readers loved the show. When the series didn’t sell, Cindy recalls, “One of the readers said to me, ‘Cindy, don’t be stupid. Turn your scripts into a book series.’” And so she did!

In May of 2011, Cindy took the big leap and exchanged her dancin’ shoes for a lap top—she retired from dance. “It was a scary proposition,” Cindy confesses. “I was terrified, but I had the full support of my husband, Saint Bill. It has been a huge change for me. I went from dancing hard five hours a night to sitting in front of a computer. I still work-out and I take my dog, Harvey, for a daily run. I have to or I’d be as big as a house.”

Does Cindy McDonald miss dancing? “Sometimes I do,” she says. “I miss my students. I miss choreographing musicals, but I love my books and I love sharing them with readers.”

To read excerpts from future books, view book trailers, and keep up with everything that is Unbridled, please visit Cindy’s website at: www.cindymcwriter.com

The gang are back with a new Unbridled Adventure at Westwood Thoroughbred Farm. Where they train racehorses. The animals bring some laughter to the story. Agaimst the Ropes can stand alone or be read as part of the series. There is a couple of story lines running from other books about different relations between different characters. With one major storyline that is featured in Against the Ropes.

Punch is a big black man that has worked for Eric West for years. He is great friends with Mike West who is his best friend.
He likes Zoe but wants to avoid her because he does not feel he is worth her. The Wests like to tease him about her, because she has been chasing him.

On his way back to the farm with bricks for a new wall he got at Zoe's family business he sees a car crashed into a tree. He stops to make sure everyone is okay and sees a big white man on a bridge that is thinking of jumping. Punch tries to talk to him.

Punch takes him to Westwood farm and asks Eric to hire him to help build the wall and that he is down on his luck. Punch always wants to help the strays. Eric lets Eugene Strom stay in the bunkhouse.

Eugene is likeable but he is big and clumsy and causes all kinds of accidents which are funny but not to the others. Eugene is hiding. He was a underground street fighter. He makes up stories of things and places he has been.

Kate West is dating Dr. Holden Reese a vet. While she is working for a different vet. Dr. Holden works with Ava West and she blackmailed him to hire her. Kate is jealous of Ava working with Holden because she knows that Ava her ex-sister-in-law likes to sleep around and get men to do what she wants them to do.

At first I hoped things would workout with Holden but there are lots of tangles around Kate, Ava, Holden and Carl(cop) also with Mike West. Mike is the oldest of the three west kids. He was married to Ava but she was sleeping around and he caught her with Carl.
Carl is sleeping with Ava but also likes Kate and has come to her aid sometimes. Their is a few sex scenes that I did skip over.

Overall I like this series and will keep reading it. I have to know what is going to happen next. There were a lot of twists in this book that I was not expecting. Some I liked and some I did not. There was a lot of smiles to be had reading along with all the drama.
I did like the scene when Kate was reading Lauren Carrs book.

Thanks so much for the lovely review for AGAINST THE ROPES.